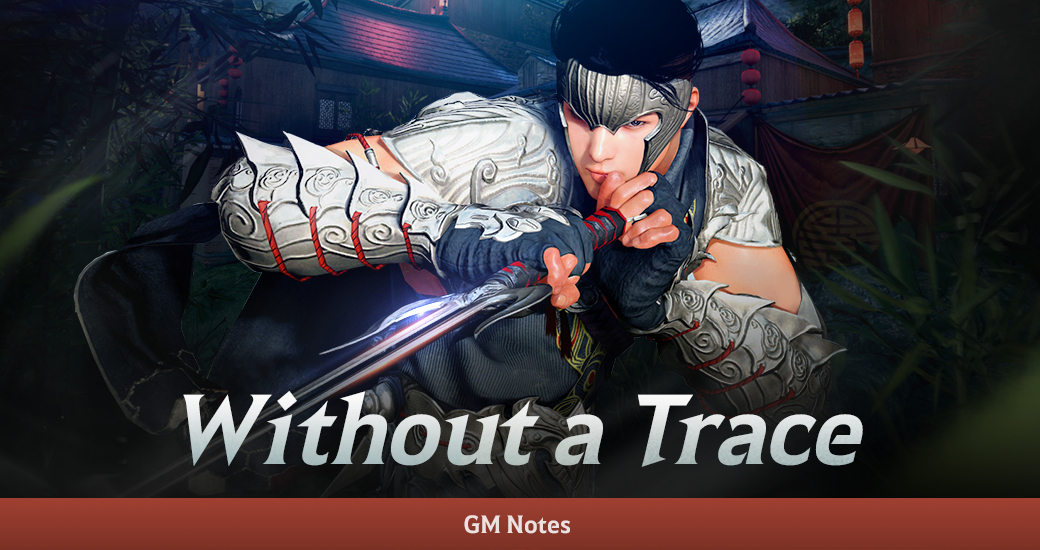 In the Shadows
Learn more about the Ninja

Embrace the shadows as Ninja will soon be available for Black Desert Xbox! With his incredible movement, and ability to hide in plain sight, the ninja truly is a specter of the night. Find out more about the Ninja below.

The leader of the ninja clan was a feared warrior. Although he was young, stories of his exploits during the war were heralded by his allies, and told as tales of horror by his enemies. Being heavily outnumbered meant nothing to him. He would cut down his enemies in droves, and those that made it out alive would never dare to stand against him again. His youth caused many opponents to underestimate him in the beginning, and towards the end of the war cemented his reputation.

Although his memories of that time were a blur, he remembered tasting defeat. He remembered retreating to the forest, but he could not remember how this happened. He never lost a fight, that much he remembered, but as he sat by the campfire and stared into the flames, he thought back to how he got here.

The war had taken a huge toll on the Narusawa clan. They suffered many casualties and certain decisions caused them to lose face with many of the other clans. With their influence and power diminished, the house itself felt that the victors of the war would come after them, and an example would be made. That is why they hired the fledgling ninja clan.

“Find out about their plans for the Narusawa clan.”

The plan was simple, sneak into the halls of the clans, pilfer some documents and report back. Yet this was not easy for them. Each member of the clan had been a fighter in the war. The battlefield was easy to navigate, even easier to understand the objective. Go here, kill this, come back. But espionage? That was a whole new world for them to learn.

Each ninja took a different clan to infiltrate. The leader decided to take the house with the most to gain at the fall of the Narusawa clan. This house had risen through the ranks through misinformation, and he thought it would be the most likely candidate for anything afoul.

Breaking in was easy. He ran up the wall, along the top and leaped to a roof that was nearby. Silently he leaped from roof to roof, completely avoiding any of the guard patrolling underneath. Before long he made his way to the main building. As he sat on the roof surveying guard movements, he realised that there wasn’t just one clans guards. 4 of the 5 most powerful clans were represented, with only the Narusawa clan missing. This increase of guards would be problematic. He could no longer sneak through the window which was his first instinct, and instead looked for some kind of skylight or hole in the roof. He searched but found nothing.

The only option was to create a way through. He peeled back some of the tiles, carefully lay the tiles down, and slipped into the crack. He was now in the rafters of the kitchens, and slowly but surely made his way into the main hall. The shadows flickered and danced across the walls from the torchlight, yet the people sat still. The ninja flay flat on the rafters, slowing his breathing down to hear their discussions.

“Why not just kill the Narusawa clan like the other lesser clans?”
“If we did that there is a chance of a revolt, we need something that will villainise them. Us backstabbing an ally so brazenly would surely bring all eyes on us.” said a man, no older than 30 who headed the table. “We need something more” he paused for a second, “more treasonous”.

There was a mutter of agreement as the shadows danced like demons on the wall. Suddenly the shadows stopped, and seemingly looked right at him. He remained motionless, yet the hairs on the back of his neck stood upright. The cold grip of fear had seemingly encompassed him, as the shadows still remained motionless despite the flickering of the flames. He had heard all he needed to, and needed to get out. He carefully stood, and once again crawled through the opening. As he went to make his way out of the complex, a tile slipped from beneath his feet and smashed on the floor below.

He started to dart across the rough, no longer remaining stealthy but driven by a will to survive. One arrow whizzed past, then another and another. Each of the arrows getting closer to hitting. His lack of experience in extraction was showing, as instead of erratic movements to make it harder for the archers to hit him, he bolted in a straight line. Yet he could see the wall just in front of him. He leapt through the air just as an arrow struck him from behind. He felt a sharp, searing pain all the way through his body as his leap thrust him over the wall. As he landed all grace had escaped him and his body smacked against the floor. The agony of the arrow embedded into his back pinned him down. He couldn’t move but he needed to get out. He felt his eyes begin to close.

Through the silence he heard the creak of the gates and the barking of dogs. He forced himself to his feet. The pain that was so vivid just a minute ago seemingly slipped away as he ran into the forest. He had no time to dwell on the absence of pain as he continued to run, his light footfalls barely cracking sticks beneath his feet.

He chalked his escape down to his resilience and youthful vigor, but no matter how far he got away from the complex, he could not shake the feeling that he was being followed from the shadows.

The Ninja is a predominantly assassin-type class using a short sword as their main weapon, and shurikens as their offhand. As an assassin class, they have great movement and complex combos that once mastered will allow you to become a force to be reckoned with. Ninja’s are vulnerable to attack however, and rely heavily on evasive techniques to duck out of harm's way.

Black Moonlight
Disappear into the shadows and unleash a rain of shurikens on top of your enemies.

Ninjutsu: Shadow Clone
Harness the power of the shadows and release them at your enemies, then shadowstep towards the enemy dealing a powerful upward kick.

Block Jump
Disappear from sight and reappear behind the target, giving you chance to unleash a barrage of attacks on the target.

The Ninja will be making his way to Black Desert after the July 10th maintenance. There will be no pre-creation period for the Ninja, and you will be able to play instantly once the game goes live.