Drakania’s Awakening is finally released for all regions on July 27, 2022.

Unlike other classes, we began developing her Awakening after her Succession. This was rather a bold and new decision on our end, and we are finally glad to be able to reveal the news of her release to all of our Adventurers who’ve waited with great anticipation. We hope you enjoy her Awakening form.

To go into greater detail regarding her development process, our primary focus was to introduce new combat mechanics that allow Drakania to perform quite differently in Awakening compared to her Succession. Since she is dual-wielding spears, we wanted her movements to feel more primal, and we focused on a “stance dancing” mechanic that emphasized manual control of the class with precise timing of skills.

Drakania’s Hexeblood form is focused on swift and relentless attacks that chain together to overwhelm opponents, while Dragonblood is a more heavy-hitting form. You may initially feel slightly overwhelmed by the different variations of certain skills available in both forms. The basic animations for the skills are similar, so we felt that once Adventurers grow accustomed to these differences. Along with the “stance dancing” mechanic (which can also automatically activate after certain skills), we will see more and more Drakania Adventurers maneuver between forms with relative ease. (Of course, since her Awakening was designed to be so conceptually different from previous classes, we do expect it will take some time for Adventurers to get used to as it may appear very complex at first glance. We hope you’ll take the time to see her true ability shine.)

● Aerial Burst - Flow: Obliterate
- Unleash the might of Dragons to crush all those nearby, then obliterate them by slamming down your trion.

● Doombringer
- Channel the winds into your trion’s left spear, ascend, then come crashing down to the ground.

● Tectonic Slam (Hexeblood)
- Combine both spears to channel the winds, then charge toward the enemy.

● Tectonic Slam (Dragonblood)
- Combine both spears, then unleash the winds forward to push back the enemy.

● Sundering Roar (Hexeblood)
- Channel the winds into your trion’s left spear, then unleash them forward. Set your right spear aflame, then leave a burning claw mark on the ground.

● Sundering Roar (Dragonblood)
- Channel the winds into your trion’s left spear, then call upon the might of Dragons to unleash an earthshattering roar forward. Your destructive Dragon breath decimates all enemies ahead.

Family Fame constitutes of a daily Silver reward that grows as you continue your adventure in the world of Black Desert by increasing your combat prowess, life skills, knowledge (energy), and contribution points.
Thanks to the past update where we increased the Item Drop Rate buff granted by your Family Fame, a greater number of Adventurers showed interest in Family Fame. Considering the current state of game balance, we decided to increase the funds rewarded by Family Fame, particularly to increase in greater numbers in lower levels.
● Increased the amount of Silver obtained daily via in-game mail from your Family Fame.

※ Combat Fame factors in the total sum of the combat levels of all characters in your Family. Characters from Lv. 56 will count for double, from Lv. 60 quintuple the fame.

※ Special Fame factors in your Knowledge and Contribution Points.

Wizard
Awakening
● Flame's Calling
- Changed to now cause your summoned minion to disappear if you switch to equip a matchlock after using the skill.

● Earth's Calling
- Changed to now cause your summoned minion to disappear if you switch to equip a matchlock after using the skill.

Drakania
● With the release of Drakania's Awakening, the Marni's Pocket Watch item has been removed.
- Any item used to reform or that was transfused into Marni's Pocket Watch, such as Inverted Heart of Garmoth and any crystals, will be moved to your storage in Heidel.
- The issue regarding Markthanan's Breath has been resolved.

● Fixed the text that displays when pressing certain buttons during cutscenes.
● Fixed some of the opening tutorial objective descriptions.

● For Campsites, the default snapping position for the repair function has been changed.

● PlayStation 5 consoles can now enjoy Black Desert up to 120 fps.


- For full information on how to set this up, please visit the [Playstation FAQ]

● The memory usage of the World Map has been improved. 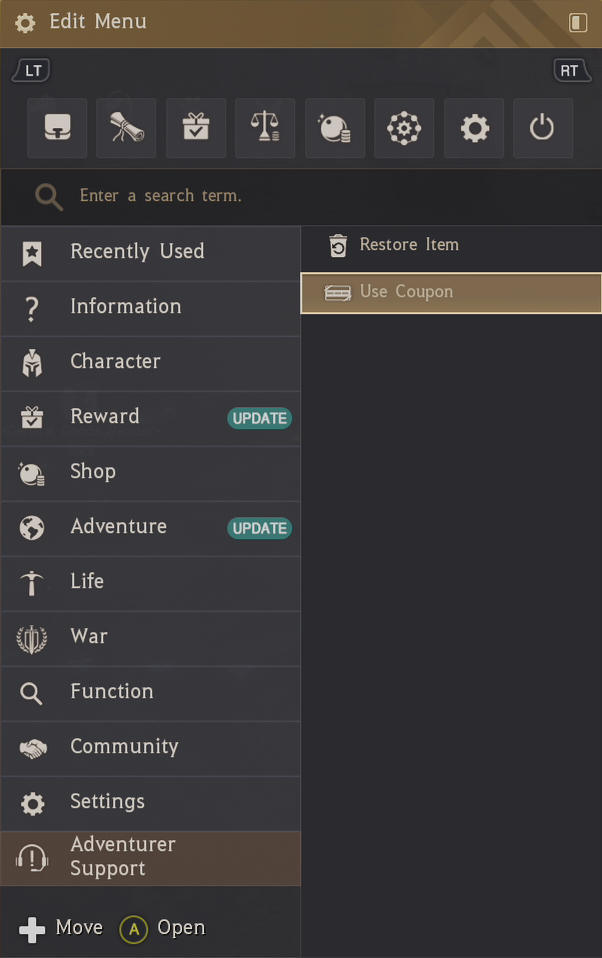 - This will allow you to register coupons without having to go to the website.