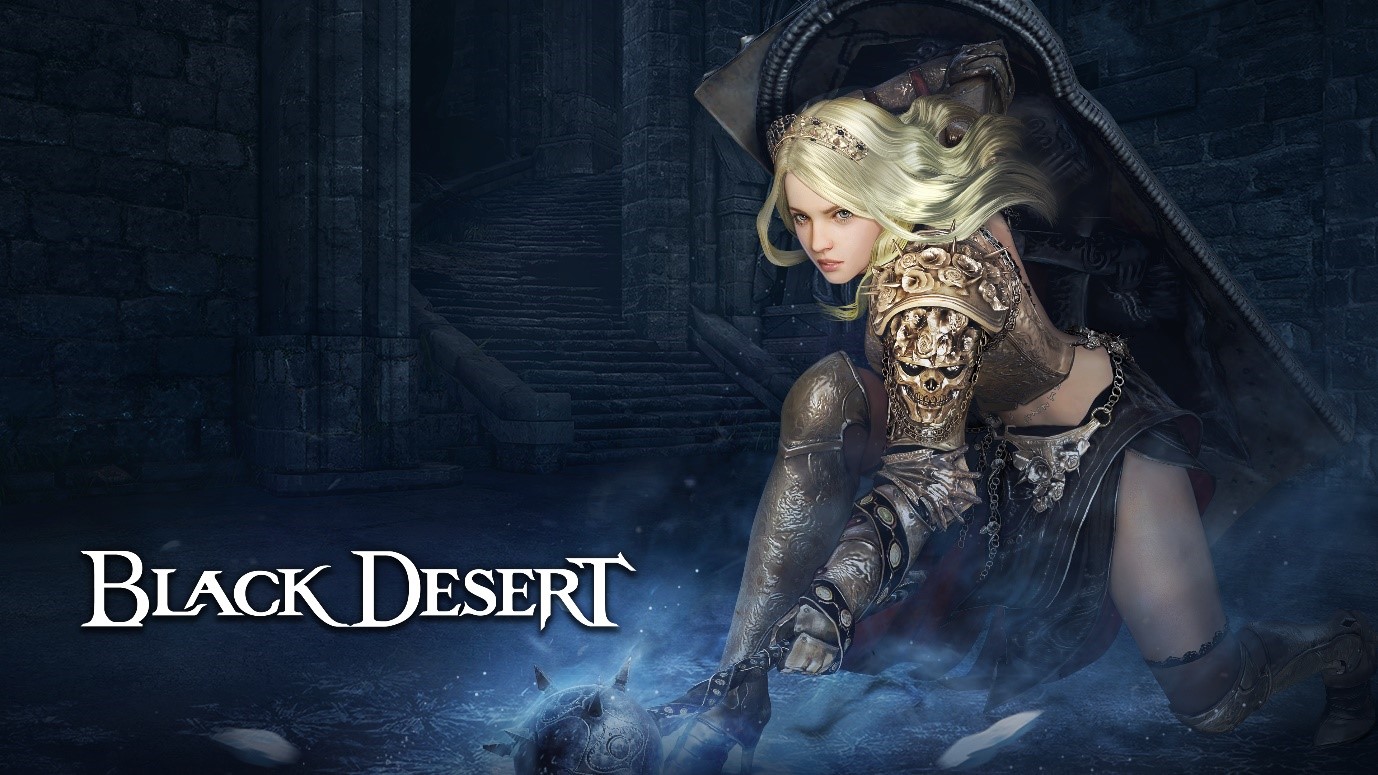 - You can create and customize the appearance of Nova as much as you like.

- Actual gameplay will be available after the official update.

- The maximum number of slots expandable with a Character Slot Expansion Coupon has become 21.

- Skill Presets save all currently learned skills and skill Add-ons which You can bring back when You need.

- You can save Skill Preset anytime, but to load Skill Preset you will either need a Secret Book of Old Moon and be in a Safe Zone, or go find a skill instructor. 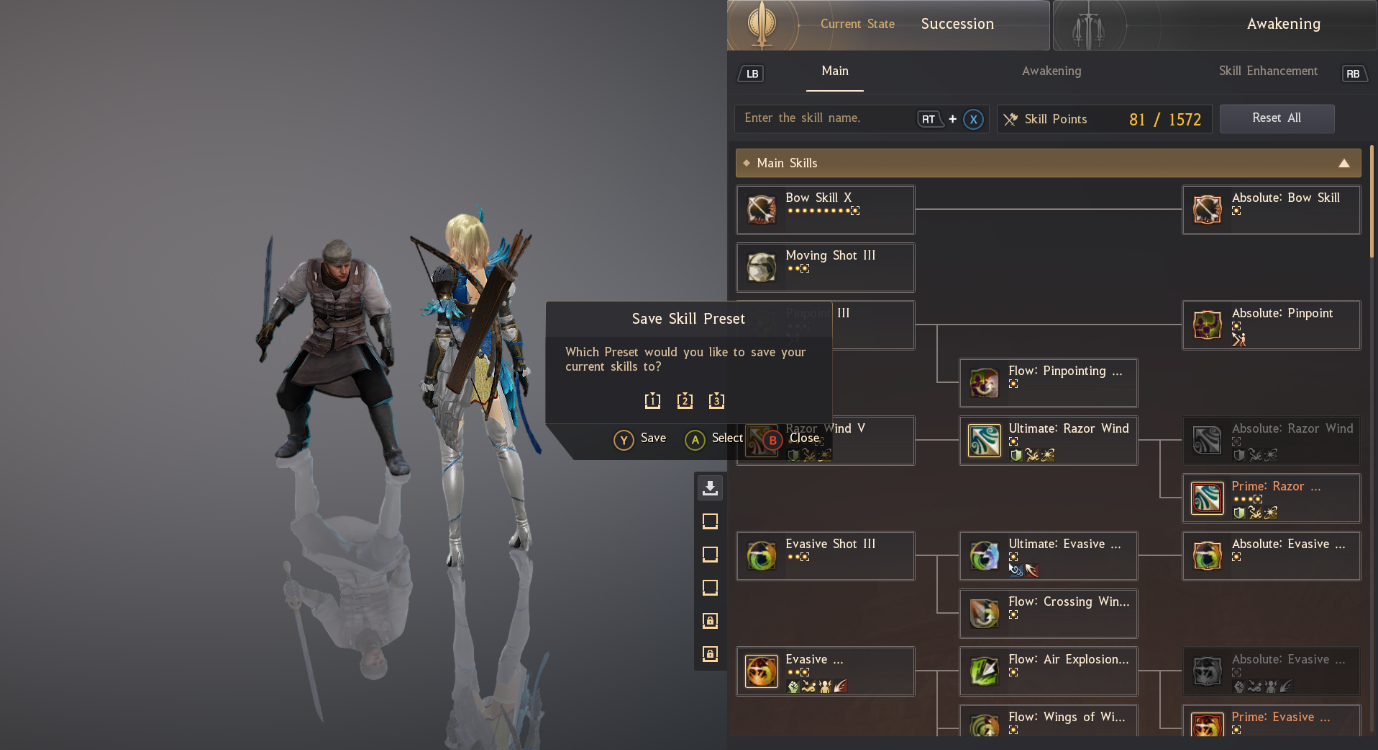 ※ Using a Secret Book of Old Moon to load previously saved Skill Presets will lock you to a 1 hour cooldown, while talking to a skill instructor only has a 10 minute cooldown.

- You can obtain one skill Preset Coupon for each time you complete your class’s Awakening and Succession quests.

※ You will get two Skill Preset Expansion Coupons when you complete a series of Talent or Ascension quests.

- Characters that have already completed their respective Awakening, Succession, Talent, or Ascension quests series can talk to the Black Spirit to obtain the coupons via the [Skill Preset Coupon] quests.

- When loading a Skill Preset, your character will act out differently according to their class.

● Changed Altar of Blood so that it cannot be entered with a Trial Character in the party.

● Fixed the issue where Black Spirit: Violation would deliver Lv. 1 damage after using it by consuming shards.
● Nightmare - Fixed to apply its Super Armor effect correctly when used while moving backwards.
● Flow: Rushing Crow - Improved to properly display the falling animation when falling from a high place while using the skill.
● Flow: Rushing Crow - Added the phrase “Scythe can be used only through Quick Slot" in the skill description.
● Black Wave - Added the phrase ""Pushes the target on good hits (PvE Only)” to the skill description to better reflect its actual effect.

● Wolf's Explosive Fangs - Added the Knockback icon to the skill effect window.
- The applied effect is the same as before.

● You can obtain "Mole's Feed" at a low chance from harvesting or plant breeding "Regular," "High-Quality," "Special," "Magical," and "Mysterious" seeds. Adventurers who acquire the feed will have a Mole appear and chase after them.
- Farming with "Magical" and "Mysterious" seeds have a higher chance of producing “Mole’s Feed.”
- The following moles have a chance to appear.
* Mole
* Slowpoke Mole
* Pudgy Mole
* Giant Mole
※ If one mole has already appeared and you acquire another "Mole's Feed", this will not spawn an additional mole. 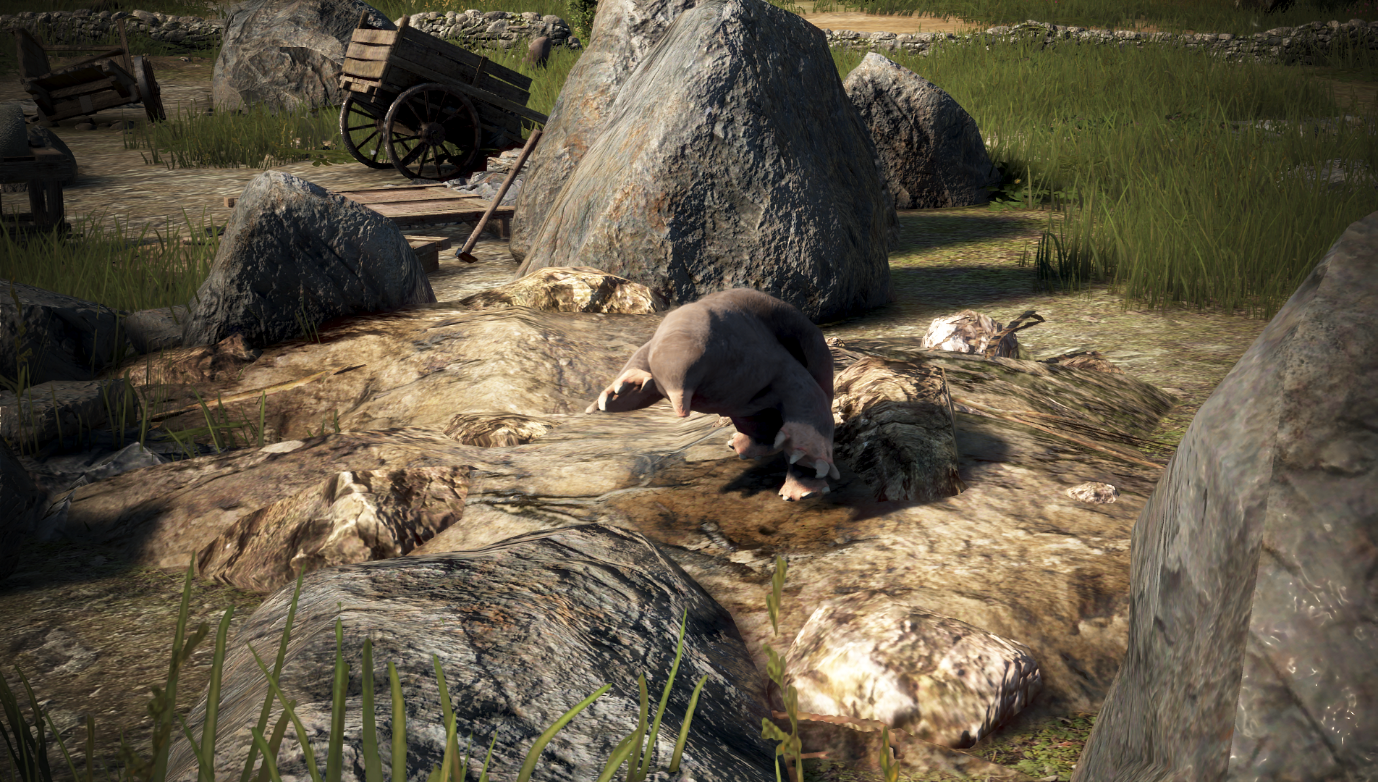 ● Changed the standards for classifying a Returning Adventurer.

● Fixed the issue where benefits for returning adventurers were not applied to those who use the Web Central Market first before logging in to the game.

- For those that could not get the benefits for returning adventurers due to this issue, the benefits will be applied for 30 days from the maintenance on December 16 (Wed.).

- The benefits for returning adventurers will begin for those eligible once they buy/sell, register for sale/purchase, or transacting/collecting silver through the Web Central Market.
[Go to relevant notice]

● You can now use J's Hammer of Loyalty exclusively made for the held on December 12th, 2020 (Sat.)
You can use J’s Hammer of Loyalty when enhancing following items with TRI(III) or higher enhancement level (must have the hammer in your inventory).
* Artina Sol
* Dragon Slayer Awakening Weapon
* Boss Weapon, Boss Armor 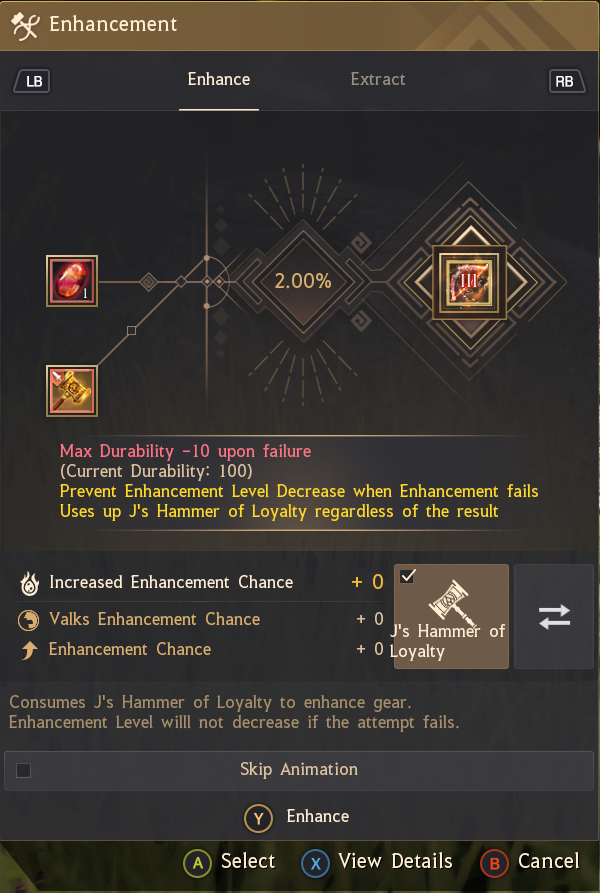 - J’s Hammer of Loyalty prevents drop in Enhancement level when enhancement fails. However, your enhancement chance will not increase even if the enhancement fails.
- Regardless of the enhancement result, the used Hammer will be removed.
- The scheduled deletion date of J’s Hammer of Loyalty was postponed to June 16th, 2021 (Wed.).
● Secret Book of Old Moon – Added “Change Skill Preset in Safe Zone (Cooldown : 1 hour)” to the description.
● Using another Golden Pig's Blessing while one is active will now remove the current effect and apply the last Golden Pig's Blessing only.

● Guild Boss Ferrid has absorbed the heat of the hottest lava in Omar Lava Cave and become even more ferocious and powerful.
- Ferrid's attacks, which contain the full might of its power, shake the cave and stimulate the unstable lava, causing a destructive explosion.
- When this overflowed lava creates a swamp, Ferrid's attacks will cause explosions and continuously produce Ferrid Talis.
- Ferrid Tali is very dangerous as it approaches nearby adventurers and spits out its lava.
- There's a low chance Ferrid Tuny will appear in the Lava Swamp.
- When Ferrid Tuny reaches Ferrid, it will pass on its energy of lava to the Ferrid, making it more powerful.
- When the Grapple or the CC status effect is applied to Ferrid Tuny, it will immediately vanish, but if it's near Ferrid at this point, it will still be able to pass on its lava energy to the Ferrid.
- As Guild Boss Ferrid has become more powerful, the chance of obtaining Energy of All Creations has increased as well as the drop rate of other loots. 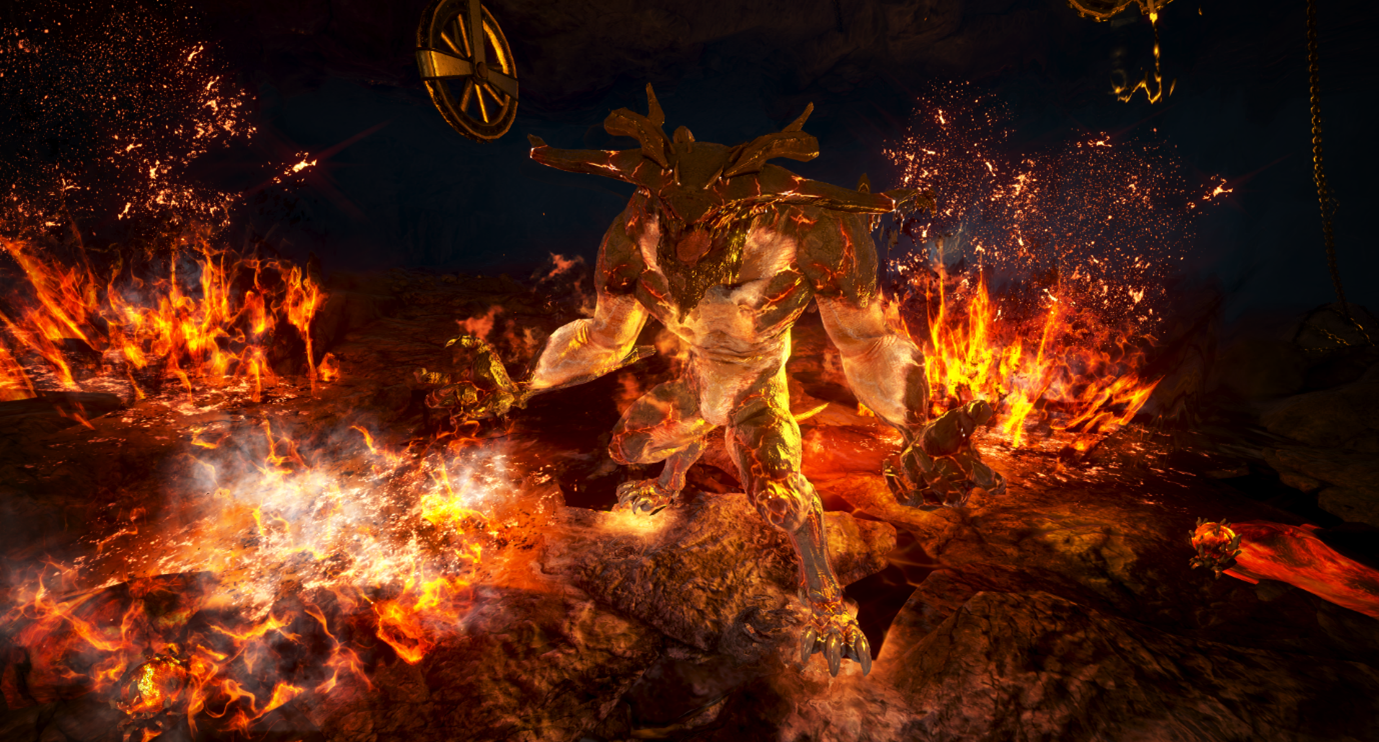 ● Added a new function that can transport mounts to where the adventurer is currently located.
- You can transport mounts held in another Wharf/Stable to the current Wharf/Stable. Guild mounts are excluded from this function.
- Transporting a mount costs 1 million silver and will take 10 minutes to complete.
- Transporting mounts with trade in their inventory have a certain chance to be destroyed, so please take note.
- Large ships cannot be transported to areas they cannot traverse to (i.e. rivers).

To bring a mount in a different region, you would previously have to log onto a different character located close to where that mount was stabled to send them to your current character. We've created this function to address the inconvenience of the existing method of transporting mounts.

● Reworked parts of the main questline in Balenos.
- It presents the story about Cron Castle that fell into ruins long ago after putting to rest the chaos that was at Velia, the first town everyone arrives in when they start their adventure. It will lead you to understand the position Balenos is in within the larger picture of the world.
- The quests from the first time adventurers arrive in Velia were reworked by adding depth to the story related to Cron Castle. When adventurers return to Velia, they will not be sent straight to Serendia either. They will be led around different parts of Velia to see different spots to see its charm.
- However, characters that are either doing or completed the quest "Village by the Beautiful Coast" cannot accept the reworked questline. They must create a new character to do the reworked questline.

● You can exchange the Epheria Sailboat Design with the Epheria Frigate design or vice versa through the quest "[Daily] Falasi Family's Kindness.”

● Added chat group “Hall of Adventurers” where adventurers can have conversations about their class.
● Those below Lv.7 will not be able to edit the default UI.
- When reaching Lv.7 with a new character, the UI settings saved beforehand will be applied.
● Fixed the issue where enhancement messages of another adventurer that has the same name as your Character and Family would be shown when the enhancement success/failure message settings are deactivated.

● Fixed the issue where some characters could not log in.

● Fixed the issue where characters would fall into the ground at a specific location near Loggia Farm.

● Fixed the issue where some UI would function improperly when leaving a chat group.

● Fixed the issue where opening Marni's Research Box obtained by defeating Valencia Guard Captain would give Marni's Stone from another hunting ground.

● Fixed the issue where furniture could not be placed on the floor of Bartali Farm 1-1 Residence.

● Fixed the issue where the back of the dress would look abnormal when running with [Guardian] Snowflake Outfit.

● Fixed the issue where the shoulder part would look awkward when customizing with [Hashashin] Snowflake Outfit on.

● Fixed the issue where sometimes you could walk underwater.

● Fixed the issue where the Anvil would not be repaired occasionally with a error message.

● Fixed the issue where furniture could not be placed on the floor of Velia 2-3 Residence.

● Fixed the issue where it would sometimes look awkward while wearing the following outfits:

● Fixed the issue where the character would become immobilized when registering a wild horse to a stable while riding on it.

● Fixed the issue where ships kept in a guild stable would not be fixed in certain situations.

● Fixed the issue where it was unable to fix the damaged guild galley in certain situations.

● Fixed the issue where the damaged rate would be displayed 0% in the information window of a galley when retrieving it from the wharf.

● Fixed the issue where the mini map and location/time settings would be off when leaving the Altar of Blood.