What are Season Servers?

For new Adventurers who are unfamiliar with what Season Servers are, a list of commonly asked questions has been collected! Make sure to refer back to this page as you continue on your journey on Season Servers!

1. What are the benefits of playing on a Season Server?

Season Servers allow Season Characters to level up and obtain gear quickly. These characters will then ready to take on the regular servers after the Season ends! It is a great way for new Adventurers to learn the game and be ready for all that the game offers.

2. Do Season Characters get deleted?

Season Character do not get deleted. At the end of the Season, Season Characters can graduate to retain their strength and gear, which will allow them to be ready for the regular servers.

Once the Season ends, the character will be permanently available.

3. I already have a character, should I make a new one?
Currently up to 25 characters can be created on one account. While focusing on one character is a good way to enjoy the contents of Black Desert, there are benefits to having multiple characters as well. You can have a PVP/PVE character and a character that is specifically for farming. You can cover more parts of the map by having different characters stationed in different areas.

* Be careful with deleting Characters as all information regarding the Character will be deleted.

For Season Characters, try to get to PEN (V) Naru Weapons and Armor! Once you get to PEN (V), you can exchange the Naru Gear with Fughar (who appears in most cities). Doing so will allow you to obtain PRI (I) Tuvala Gear, gear that is far more powerful than Naru Gear!

Keep in mind that Naru Accessories can only reach TRI (III) and cannot be exchanged for Tuvala Accessories.

6. What is Tuvala Gear?
While Naru Gear is helpful for moving past the Mediah main questline, Tuvala Gear will help you become even stronger. Tuvala Gear is necessary for any Adventurer who wants to experience all of Black Desert.

Tuvala Gear can be enhanced, but requires a special item to do so called Time-Filled Black Stones. You can obtain these stones by defeating monsters on the Season Server.

Tuvala Gear is exceptionally strong ! A PEN (V) Tuvala Gear has the same capabilities as a TET (IV) Boss Gear!

Also remember that Tuvala Gear can be exchanged for Boss Gear through Boss Gear Exchange Coupons!

7. Can I keep using Tuvala Gear?
After the end of the Season, Season Characters will transition into Normal Characters. This means that Season-specific gear cannot be used anymore.

That being said, Adventurers are advised to use Tuvala Conversion Stones in order to change their Season-specific Tuvala Gear into gear that can be used by Normal Characters.

You will be given 1 Tuvala Gear Conversion Stone per each gear type, which you must use to preserve your Tuvala gear. Do note that only 1 piece per gear type can be saved once a season ends (except for earrings and rings, where 2 are provided).

▲ You can preserve your Tuvala gear with a conversion stone

8. Do I have to finish all of the quests?

It is strongly suggested to finished at least the Mediah main questline. It is not only a requirement for Season Graduation, but also an objective on the Season Pass! Completing the main questline will also earn you a lot of EXP and a variety of items.

Additionally, completing the Mediah main questline will allow you to exchange PEN (V) Naru Gear for PRI (I) Tuvala Gear!

However, once you finish the Mediah Questline, you will need to use items such as Time-Filled Black Stones, Refined Magical Black Stones, and Tuvala Ores in order to enhance your Tuvala Gear. These drop only on the Season Servers, so it is strongly suggested to play on Season Servers.

Items which you can be equipped on Season Characters have the icon displayed below:

The Season Pass has a list of objectives that must be completed in sequence so that you will be able to graduate.

Each objective is set so that Adventurers can learn the basics of Black Desert. Completing each objective and obtaining the rewards will allow your Seasonal Character to grow stronger.

You can also purchase the “Black Spirit Pass” to gain access to an additional track of rewards! 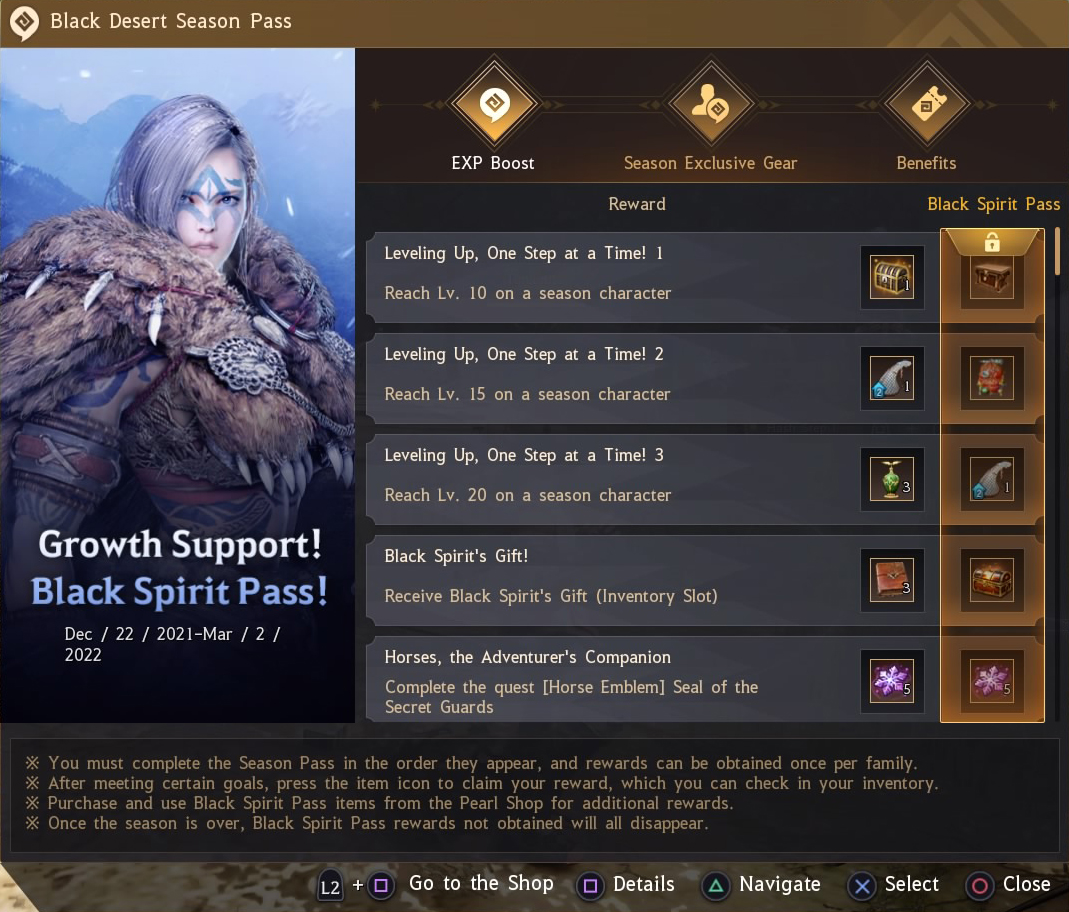 ▲ Check out the Season Pass from your inventory or through your main menu!

12. What is Graduation and how do I graduate?

Graduation is when your Season Character converts into a Normal Character. There are 2 ways to do so!

The first way is to simply play until the Season period ends. Once the season ends, your Season Character will automatically convert into a Normal Character.

The second way is to complete the Season Graduation questline once it is made available. Once you graduate, you will no longer be able to play on the Season Servers, so keep that in mind when deciding to graduate! Try to do all of the Season Server specific content prior to graduating!

It is strongly suggested that Adventurers try to enhance all of their Tuvala gear to PEN (V) before they graduate, as it is much more difficult to get gear with similar performance on the normal servers.

13. Season Special Gift - I can’t decide which one!
Many of the veteran Adventurers suggest picking gear that have similar stats with gear that fetches the highest price on the Central Market. Because certain gear is expensive, getting one by simply graduating a Season Character would be the most efficient.

Another way to choose what Special Gift you should get is to see which gear you are looking to upgrade. For example, if you have a weak Earring as your gear, then it would be best to upgrade that by exchanging for the PEN: Capotia Earring.