We’re happy to announce that the latest patch of Black Desert for Xbox One is here, and this update brings four new classes, new features, Node Wars, and a round of bug fixes. You can check out the details below!

Musa, Lahn, Dark Knight and Striker are now available for Adventurers to create and play as in Black Desert.

The Orchid Child Lahn floats on the wind and delivers death from above with her Crescent Pendulum. With a deadly grace, Lahn can defeat any enemy that stands in her way.

A lost noble child from Calpheon, Striker beats all those who stand in his way into submission. Mixing martial arts with street brawling smarts, Striker knows how to take down his opponents without breaking a sweat.

Musa was born with a tiger’s roar, and the power of that roar still echoes through his every action. His sword and bow make short work of anyone foolish enough to stand between him and his goals.

For more information regarding the backstories to these characters, follow this link:

Node Wars have been added to Black Desert for Xbox One! Engage in exciting Guild vs Guild action, and take control of the lands of Black Desert. If running a node is not enough for you, you will have the chance to fight in Conquest Wars every Saturday for control over the whole region. Learn more about Node Wars by following the link below:
Node Wars and Conquest Wars Guide

We have made a round of balance changes for the six original classes of Black Desert for Xbox One. These changes help to improve the early game for many classes and offer less-represented classes a chance to be more competitive. Learn about all the changes below:

RECENT EDITS: Modified the Kzarka Time Table to accurately display the time for the EU Region

The Family Fame Fund has been added to the game. Although we currently do not have visible rankings, we do have internal rankings that an Adventurer's fame will be based on. The Family Fame Fund will send you silver once a day as a reward for being an amazing Adventurer! There are three types of fame: Combat, Life, and Special Fame. Combat and Life Fames are self-explanatory and are based on your levels of Combat and Life Skills. Special Fame is a culmination of your knowledge and contribution points, which is then used to decide how much silver you will receive from the Family Fame fund.

Depending on your current family fame, you will also receive a tax deduction on Central Market transactions.

To help achieve better training levels, we are removing the level restrictions from the Capturing Rope, allowing you to catch and train horses earlier!

Trade
The Otters are ravenous, and trade managers are struggling to keep up with the demand of fish. To try and poach fish from their competitors, Trade Managers will no longer apply any disadvantages for unconnected nodes. This means you get more money for your fish when going for distance bonuses!

Fences
Looking after your plants can be tiresome work, so we have added the option of sending workers to tend to them for you. Your workers will be able to prune and kill bugs, allowing you to spend your time taking care of the more important things, like saving the world. You can send workers to your fences by adding the ‘My Gardens’ function to your Ring Menu, pressing the ‘A’ button on the one you wish to send workers to, and then selecting a worker.

Production Notes
You can now check the items that can be made via Life Skills (crafting, cooking, alchemy, etc.). You can access this feature through the start menu or by pressing RS Down on the item. This will show you the process of crafting the item you selected (if possible).

Guild Payouts Added
Guild leaders will now be able to pay their guild members silver from the Guild Funds. Leaders can do this by selecting their own name on the guild list and pressing the ‘Bonus Setting’ button. From there, you will be able to select the amount of Guild Funds to allocate to the payout, and then send the silver to your guild.

Please note that a Guild must have at least 30 members to distribute the funds.

Guild Quests
Guild Quests have been improved to make it easier for guilds to complete guild missions and more rewarding for participating members.

Guild Quests have also been changed to be more convenient. The following changes have been made:

The Apprentice Rank has been added to the Guild System and will be applied to members of a guild for the first two weeks of them joining a guild. Apprentices will still be able to participate in Node/Conquest Wars and guild missions, receive guild payouts, purchase guild materials, and use guild skills just like general members. Apprentices will automatically be upgraded to general members after two weeks of joining a guild. This process will happen at the first reset after their two-week period.

We’ve been hard at work making sure the world of Black Desert looks right and plays right. Sometimes we find clunky animations and apply a few fixes that not only fix a character, but may have an impact on NPCs and monsters in the Black Desert world.

Horse Riding
One of the things we noticed that has a potential impact on gameplay is the way characters use horses. We have shortened the time it takes for a character to get on a mount if they are already in combat mode. Previously, there was a delay since characters had to put their weapons away before jumping on their horses, so we aimed to decrease that delay.

We have also made some other improvements to the way that characters interact with horses:

We have also added a vaulting mechanic. This essentially makes the animation more fluid when a character is running and needs to jump over small obstacles like low-height fences.

Talking about animation changes, we have also improved the animation of characters when they stand up with a trade pack equipped. Before, this animation would be awkward, so it has been improved to look more natural.

Cheering
When picking up rare or valuable gear, your character will sometimes cheer about receiving them. Occasionally, those items are actually nothing to cheer about, so we’re removing the cheer animation from the following items:

Monsters are not always perfect, and we’ve made just a few small tweaks to the way some monsters work.

Khuruto’s are(n’t) Hard
Khuruto Amulets and Khuruto Wooden Totems were incorrectly displaying as difficult monsters to kill, even though they are inanimate objects. They will now display their difficulty based on your current stats.

Monster Awareness
We have increased the number of monsters that will be alerted to a player running near them from 7 to 10. This will improve general gameplay, allowing for players to pull more monsters than before.

We have revamped the tutorial area for Black Desert. We heard a lot of complaints that the tutorial zone was incredibly back and forth, where you would travel between a spot to kill monsters, then back to Western Guard Camp, and repeat. We have taken this feedback to heart, and improved the whole beginning section of the game.

Ancient Stone Chamber Knowledge
Learning about Edana is something that nearly every Adventurer has gone through. The five Murals scattered around the Ancient Artifact tell a concise yet important story about the history of the Black Desert world. However, sometimes the message could be jumbled based on how you interacted with the murals. To make it simpler, you can pick up the following knowledge from Igor Bartalli in Velia:

Dim Magical Sub-Weapon
If you lose the Dim Magical Sub-weapon, once the quest “Looking for Adventurers” has been completed, you can exchange 2 Tokens of Promise for the item from Ronatz (Calpheon) or Grandus (Calpheon).

Quest Title Changes
We have changed certain quest titles so that they do not contain spoilers.

Dark Portals Added
For ease of use during the main quest, the way to summon bosses has changed. You will now have to interact with the Dark Portal instead of using the summon scroll.

Other Quest Fixes and Changes

To make life easier for Adventurers, we’re making a few changes to the item system in Black Desert for Xbox One.

Boss Scrolls
Inventory slots and storage slots are a limited resource, but sometimes you want to hold on to multiple boss scrolls so that you can complete multiple scrolls at the same time with friends. To help ease some of the burden on your inventory, we’re making some boss scrolls stackable. This means that instead of having 20 Red Nose Scrolls taking up individual slots in your inventory, you will have one stack of 20 Red Nose Scrolls! Also, to make sure that you can coordinate with your team, we’re removing the time limits on these boss scrolls.

We have also made it so that the monster summoned by a boss scroll and the Adventurer who summoned it will no longer appear on the minimap. This will give you at least some chance of peace and quiet when trying to take down one of these big bad bosses.

Enhancement Chance Display
When enhancing your items, you will now be able to see the chance of successfully achieving your enhancement. This should allow you to make an informed decision when deciding between trying for an upgrade, or building more enhancement chances.

Black Stone Extraction
To make enhancing a little easier, we have made changes to the amount of Black Stones you will receive when extracting items at certain enhancement levels. Remember, you can extract Black Stones at the Blacksmith in most major towns.

Coins
Silver is an integral part of the Black Desert economy, after all you need to use it pretty much everywhere in the game. So, to make carrying silver more convenient, we have removed the upper limit of coins. This means you can now carry an unlimited supply of silver in those magical coin purses!

Militia and Rusty Weapon Improvements
Two of the earliest weapons you get in Black Desert will receive a slight buff. Both main weapons of the series will now have an additional +10 accuracy.

We have made changes to Kzarka summoning times for both NA and EU to make them more convenient for Adventurers. Below is the new timetable for the Lord of Corruption: 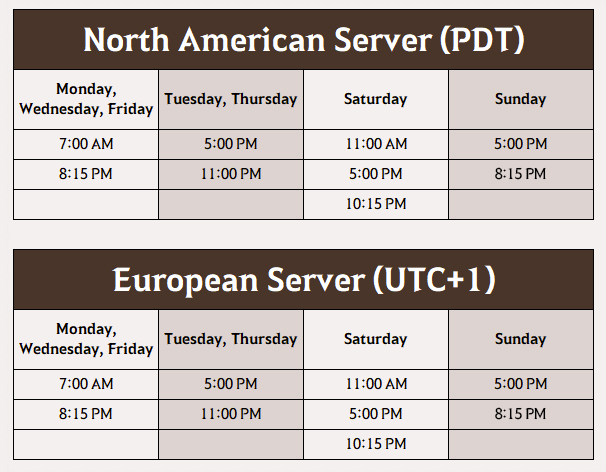 Display Options Added
One of the most heavily requested features has been added to the game. Screen size settings can now be adjusted, allowing you to bring the UI into the same zone of your TV.  We have also added a gamma slider to further allow you to customize the way the game is displayed.

Screen Adjustment!
The first time you create an account, you will be prompted to set the safe zone for the screen. This will allow you to make sure that all the UI functions of the game will fit within your screen limits. If you have already made an account and wish to change the safe zone settings, you can do so by adding the ‘UI Display Size’ function to the Ring Menu.

NEWS
We have added a ‘News’ option to the start menu. With this option, you can see the latest news and updates to the Black Desert world without leaving the game!

More Changes
When scrolling through pet appearances, a notice will mention that secondary appearances can only be obtained with ‘Pet Appearance Coupons’.