Our latest update has been released, and with it brings new Field Bosses, new Boss Gear and a way to enhance your Asula’s Crimson Eye accessories! Check out all the information below!

Red Nose, Dastard Bheg, Giant Mudster and Dim Tree Spirit have all been added as Field Bosses. Through their ties to the dark energy that permeates through the Black Desert world, these monsters have received a significant power boost and now pose an incredible threat to the citizens of the world. Help take them down and you will be rewarded handsomely for your efforts.

With the field bosses, we have also added the chance to collect the powerful Boss Armors. Red Nose’s Armor, Bheg’s Gloves, Muskan’s Shoes, Giath’s Helmet and Dim Tree Spirit’s Armor are all now available as drops when facing off against these bosses. Boss Gear can be obtained after defeating those bosses through either Field Boss fights, or Black Spirit summon scrolls (cannot be obtained through story scrolls).

Although rare, it is possible for enhanced Asula’s Accessories (up to TET) to appear in drops.

We have also added the Asula’s Weakened Magic Accessory which you can use to trade for the Asula’s Crimson Eye accessories. These items will drop in the following spots: 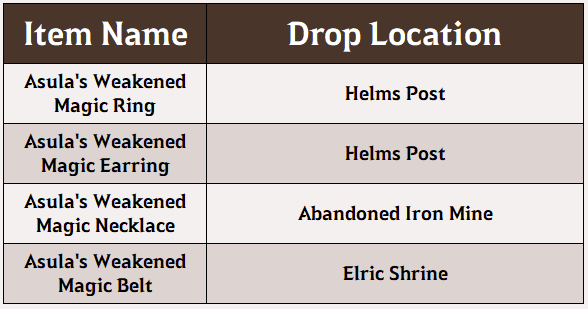