A new update makes its way to Black Desert, bringing new Red Battlefield changes, 1 on 1 arenas and more! Check out the details below and find out all the latest changes coming with this update.

The last change is that, if there are now less than 2 participants in the Red Battlefield after it starts, the Red Battlefield will conclude after 1 minute has passed, and any members remaining will be returned to their original servers and locations.

With so many adventurers testing their mettle in the Battle Arena, the Cliff Detached Force have opened a new 1:1 arena. To enter, you will need to talk to Hafun in the Battle Arena. Once you do, will you be able to fight in a 1v1, King of the Hill situation.

The two players who enter will fight each other in a 3-minute bout. If one player overcomes the other, the loser will be moved outside of the arena, and the winner will remain to face the next challenger. If no winner has been decided after 3 minutes, both players will be removed out of the arena and a new set of players will enter.

Much like the Red Battlefield, you will need to select and join one of the ‘Marni’ servers Battle Arenas. If there is currently an active Conquest/Node War on your current server, you will be unable to join the Battle Arena.

This update will also include a performance update to PlayStation 4 players which was applied to Xbox One players through a client patch on September 11th. This update improves the memory usage of the game under certain circumstances.

As the number of adventurers traveling to the Pit of Undying increases, the number of spectators has drew large sums of money for the Crows Nest. Therefore Patrigio, the first crow, has upped the number of Crow’s Black Jewels which are required for ranking up.

You can win Crow’s Black Jewels by completing fights in the Pit of the Undying.

With this increase, we are also adjusting the number of Crow’s Black Jewels required to do the quest ‘[Promotion] Crow’s Sealed Promotion Scroll.

A new quest has also been added that will allow you to challenge Yulho, the Pit’s rising star. This quest is available once per family, and you must have completed the ‘[Promotion] DUO: Undying Crow’s Insignia’ to accept the quest ‘Chorpy’s Secret Offer’ from Chorpy. Defeating Yulho with this quest will reward you with Crow’s Black Jewel x10.

The Imperial Auction house is a feature occasionally used to list and sell valuable items. Although like most Auction Houses it rarely gets super rare items, but when it does….

As the Imperial Auction House is newly introduced, we have added NPCs that allow you to access their listings. The following NPCs have been added.

Special Items will occasionally make their way through the Imperial Auction House. When the auction begins, a world message will be displayed alerting all adventurers that the bidding has begun. After this message goes out, the Imperial Auction Managers will begin accepting bids on the listed items. The current highest bid price will be

displayed in the window, and then another adventurer can bid higher than that, and it will continue to increase until the auction is over.

The first items to be listed in the Imperial Auction House will be as follows:

The Nightmare Arduanatt is a rare Dream Horse that has a Black Body and Wings. 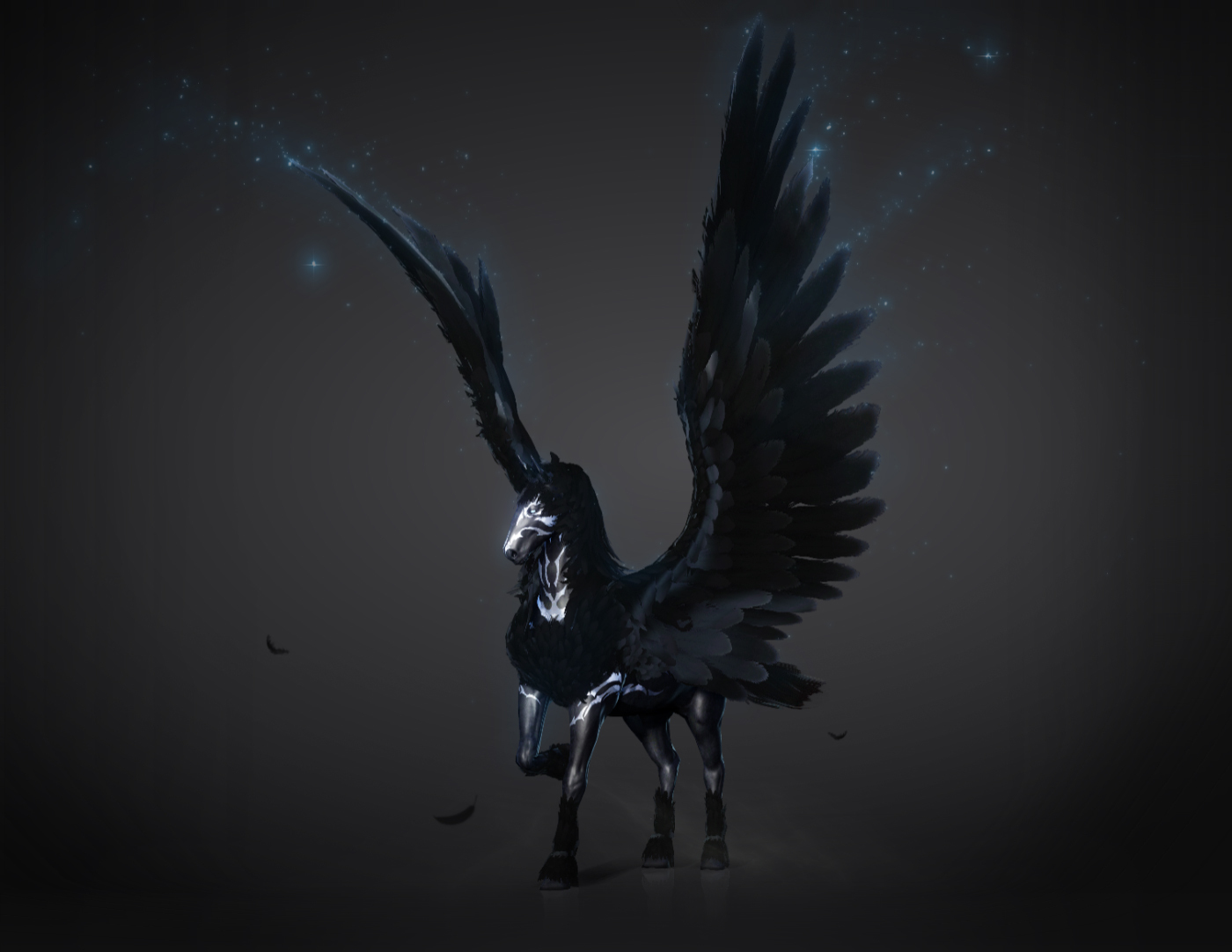 For more information about the Altar of Blood, please read the GM Note here

During the September 4th update, a change to Field Bosses went through that we unfortunately did not mention, and for that we are sorry.

The rewards for defeating certain Field Bosses have been updated. We have increased the odds of receiving the current rewards from field bosses, and we have also added the chance to get an Enchanted Scroll +20,+30 or +40. An enchanted scroll can be alchemized with Black Stones to create an Advice of Valks of the same value.

A new item has been added to the Loot Tables of different World Bosses. The Belongings of an Adventurer will now drop at certain boss fights, and offers some of the rarest accessories within Black Desert at grades up to TET. This item will drop at the following bosses:
Kzarka, Nouver, Karanda, Kutum, Quint, Muraka,.

The following accessories can be found in the Belongings of an Adventurer with an enhancement grade up to TET (IV):
Ogre Ring, Laytenn’s Power Stone, Valtarra Eclipsed Belt, Narc Ear Accessory, Basilisk’s Belt, Ring of Crescent Guardian, Eye of Ruins Ring, Orkinrad’s Belt.

Golden Treasure Chests have been discovered around the world of Black Desert. These Golden Treasure chests are scattered around the world, and can only be opened with a Golden Key. These Golden keys can be obtained by trading 100 Silver Keys with Morco of the Crow Merchants guild, who can be found in most major towns and cities. These chests contain a whole range of different items includes Dandelion Weapon boxes, Tungrad Earrings and more!

We have also modified the conditions required when using the Weapon Exchange coupons on new classes.

Barhan Nesser’s scouts have recently discovered that an Argos Ritual of Blood has been successful. Although not is much known about how it worked, certain Valencian natives have partook in the ritual and have unlocked a new source of power.

● Fixed an issue where Pit of Undying Boss Kunga would occasionally move abnormally.

● Decreased the damage of the Grudge Bearing Green Orc’s in the Traitors Graveyard.

● Fixed an issue where Belcadas, who appears in Sherekhan Necropolis, would have abnormal effects once attacked.

New quests have been added to certain spots in Mediah to help aid in the acquisition of Asula accessories. Adventurers who have just completed Calpheon may find the Mediah quest easier after completing these missions.

‘[Valencia] Dawn of a New Age’ has been added to the game. This quest will allow those who have completed certain quests in Valencia the chance to receive a 7 day outfit of their choosing. The quests are as follows:

Adventurers who have already completed the quest can find the ‘[Valencia] Dawn of a New Age’ available from their Black Spirit.

A new quest line has been added for characters reaching level 51 when entering Hexe Sanctuary. This quest line gives a chance for adventurers to obtain Witches Earrings. The quests are named as follows:

NPC, Sound and Other Effects

● Part of the environment in the Traitor’s Graveyard has been modified to make it easier to see.

● Fughar has been added to Trent, Anacado Inner Harbor and Abun.

●To help performance, certain audio cues have been optimized. This means that in certain situations, only the sound of your character will be played.

● Player sounds have been improved so that they sound more natural at different distances.

●Made Instant Resurection usable up to level 20 (previously lv.15) and added the following regions where it can be used.

One change that is universal is that skills which transition to awakening can now be added the ring menu.

● Scars of Dusk, Absolute: Scars of Dusk – Improved the animation speed of the skill’s 3rd hit while mounted.

● Flow: Reckless Blow – Fixed the issue where the player would slow down momentarily when the skill hit.

● Flow: Air Explosion Shot – Doubled the movement distance of the skill when activated after certain skills.

● Fearsome Tyrant- Changed the skill input to ↓ + X/□ while mounted.
● Raging Thunder – Fixed some of the wording in the skill description on how to use the skill.
● Shake Off – Fixed the issue where the skill’s Invincible effect wasn’t being applied in awakening.

● Upward Claw – The skill’s movement and effect will now match.

● Heilang I~X – Fixed the issue where using Surging Tide would have Heilang attack 1 time less when the skills level was between I and X.

● Ultimate: Blitz Stab – Reduced the movement distance of the skill.

● Below the Belt – Increased the skill’s Extra Hit Damage

● Black Spirit: Below the Belt – Fixed the issue where the skill was dealing 1 less hit for its final hit.

● Frost Pillars – Improved the skill to now combo into New Year’s Eve after using the skill.

● Serpent Ascension – Increased the skill’s activation speed, and the Ninja now assumes the Transition Stance when using the skill.

● Drastic Measure – Increased the charging speed of the skill.

● Half Moon Slash – Improved to combo more smoothly into other skills after using this skill.

● Flow: Indignation – Added the Down Smash effect to the skill.

● Flow: Bite Off – Increased the attack speed of Echo Spirit when using the skill.
● Infernal Destruction – Added the Down Smash effect to the skill.

● Revamped the Florin’s Leaf to now display its energy figures.

● The Cliff’s Awakening Weapon Box can now be opened on the Hashashin.

● Ensnaring Sands – Animation speed has been increased.
● Serpents Coil – Animation speed has been increased.
● Flow: Voracity – Changed to activate faster whilst using Serpent’s Coil.
● Flow: Condemnation - Changed to activate when pressing R1/RB after using Flow: Voracity.
● Quicksand - Can now be used from the Ring Menu to switch to pre-awakening skills.
● Flow: Sand Warp - Can now be used after the first hit of Collapse.

● The default stance of Lahn in the Pearl Shop has been fixed.

● When viewing pets in the Pearl Store, they will now make a sound.

● Fixed an issue where characters would be unable to move after being mounted and interacting with an NPC that triggers a cut scene.

● Fixed an issue where Alchemy Stones would not continue to activate after swapping equipment.

● Fairies will no longer reset potion settings once all potions have been consumed.

● Fixed certain issues with graphical anomalies in the world.