● Awakening and Succession for Nova, the true queen of thorns, have been released.

- Reach Lv.56 or higher and you can proceed with Awakening by accepting [Nova Awakening] Invitation from S from the Black Spirit’s main quest and completing the following series of quests. Also, you can choose Succession for your Nova by completing [Nova Succesion] King of the Dead that continues right after the Awakening quest.

● Added quest [Valencia] Dawn of a New Age where you can obtain a Pearl outfit (7 Days) for Nova.

- You can accept the quest above from the Black Spirit by completing [Lv.56 Valencia] Eastern Sands Kingdom Story on Nova.

● Increased the efficiency of Devour when using it on PRI (I) - TET (IV) enhancement level gear.

- The increase in Enhancement Chance when devouring weapons and defensive gear were changed to the following:

※ However, these numbers only apply to using Devour when the Enhancement Chance is at 0."

● You can now enhance Capotia accessories.

- If you fail to enhance the Capotia accessory, it will not be destroyed but the enhancement level will decrease and the max durability will also decrease by 10.

- You can attain max durability recovery by using an accessory of the same name or Yona’s Fragment.

● Descriptions for enhancement and crafting have been added to the tooltips of Capotia Necklace, Earring, Ring, and Belt.

● Fixed the issue where motions would sometimes be displayed abnormally when moving out of water.

● Fixed the issue where sometimes you could walk underwater.

● Fixed the issue where certain classes performed abnormal actions when Combat Assistance was turned on.

● Added a feature where you can hide the appearance of your sub-weapon while in non-combat stance.
- You can turn on/off this feature by pressing the shield icon on the lower part of the equipment window.
- This can be applied while you are in non-combat mode. The appearance of your sub-weapon will be exposed again when switching into combat mode.

● Improved the following skill to hit targets that are in higher locations.

● Fixed the issue where Black Spirit: Violation would deliver Lv. 1 damage after using it by consuming shards.

● Prime: Dream of Doom - Fixed the issue where the projectile could not be seen when looking at another adventurer.

● Divine Judgment of Light – Changed the effect to be corresponding to the attack range.

● Fixed the issue where the description for Thrashing Wolf was displaying information about WP recovery incorrectly.

● Bitter Reign - Improved the combo motion after the 1st hit is used while casting Quoratum's Protection.

● Rage Absorption - Fixed the issue where the Attack Speed Increase buff was being applied.

● Changed the following skills to not activate Quoratum's Protection at the end of the skill.

● Fixed the issue with the Combat Assistance mode where the direction of attacks would not change with the enemy movement when performing a chain of standing or forward basic attacks.

● Pressing RS/R3 to change into idle stance when summons are out will now remove the summons.

● Fixed the issue where the summons were kept even though Quoratum's Protection was no longer active.

● Fixed the issue where the effect on the shoulders would remain when getting on a mount and the summons were removed.

● Reduced the cooldown from 3 minutes to 2 minutes.

● Winter Testudo - Fixed the issue where the skill would not activate for adventurers not participating in the Node/Conquest War.

● Winter Testudo - Fixed to not collide with the summoned guard.

● Winter Testudo - Fixed the issue where using the skill in a safe zone would push other characters back.

● Fixed the issue where Nova would not blink in the Customizing screen.

● SP will be recovered when successfully blocking an attack during Quoratum’s Protection.

● SP will be recovered on a successful Mauling Star hit.

● The last hit will be activated right after pressing RB/R1 while using Mauling Star.

● Mauling Star - Equal amount of damage will be inflicted to enemies within the hitting range regardless of the point hit by the Morning Star.

● Changed the critical hit rate of Mauling Star to be not applied to PvP environments.

- Critical hit rate will not be applied to PvP environments.

● The description of Quoratum’s Protection in the skill guide has been changed to “Shield Block Stance” to be read more intuitively.

● Fixed the issue where facial expression would not be displayed when doing “Confident.”

● You will not be able to move pressing RS while using following skills:

● Summoned guard will be unsummoned when using Emergency Escape.

● Summoned guard will be instantly unsummoned when Quoratum’s Protection is deactivated.

● If Icy Prison is used while a guard is summoned, the guard will attack forward.

● Fixed the issue where bound effect was applied to the opposition when using Black Spirit: Icy Prison with a guard summoned.

● Fixed the issue where the number of hits for the 2nd hit was fixed to three when using Bitter Reign while mounted.

● Fixed the issue where the effect of Cold, Dark Star would be activated during the Chain Hit (1st hit) when using Bitter Reign while mounted

● Changed the condition for the actiavtion of “Hide Other Characters” when a world boss appears.

- Before: 30 or more nearby Adventurers

- After: 10 or more nearby Adventurers

● Added a feature where you can select the entire part when dyeing a gear in the Dye window.

● Awakening outfits for all released characters can be obtained from Premium Outfit Box.

● Increased the benefits gained from defeating furious monsters at night.

● The Guild Boss Giant Mudster has amassed powerful energies from the soil of Glish Ruins.

- As Giant Mudster's body begins to crumble from taking damage, it will let out a large cry, calling forth Mudsters.

- The Giant Mudster will try to absorb these Mudsters into its own body, which will restore the destroyed portions and restore its health in the process.

- As the Guild Boss Giant Mudster has grown much stronger, the chance to loot Stone of Malice has greatly increased, along with other junk loot drops.

● The Guild Boss Ancient Puturum's power source has reached its limit and made its attacks more dangerous than before.

- Once Ancient Puturm gathers a portion of its energy, it will begin summoning power towers to draw from them and deal a devastating attack.

- You must defeat the power towers within 1 minute to prevent Ancient Puturum from unleashing his devastating attack. Also, power towers will inflict explosive damage when destroyed.

- Defeating all the summoned towers within 1 minute will cause Ancient Puturum to lose power and land. It will remain immobile for a short period of time. 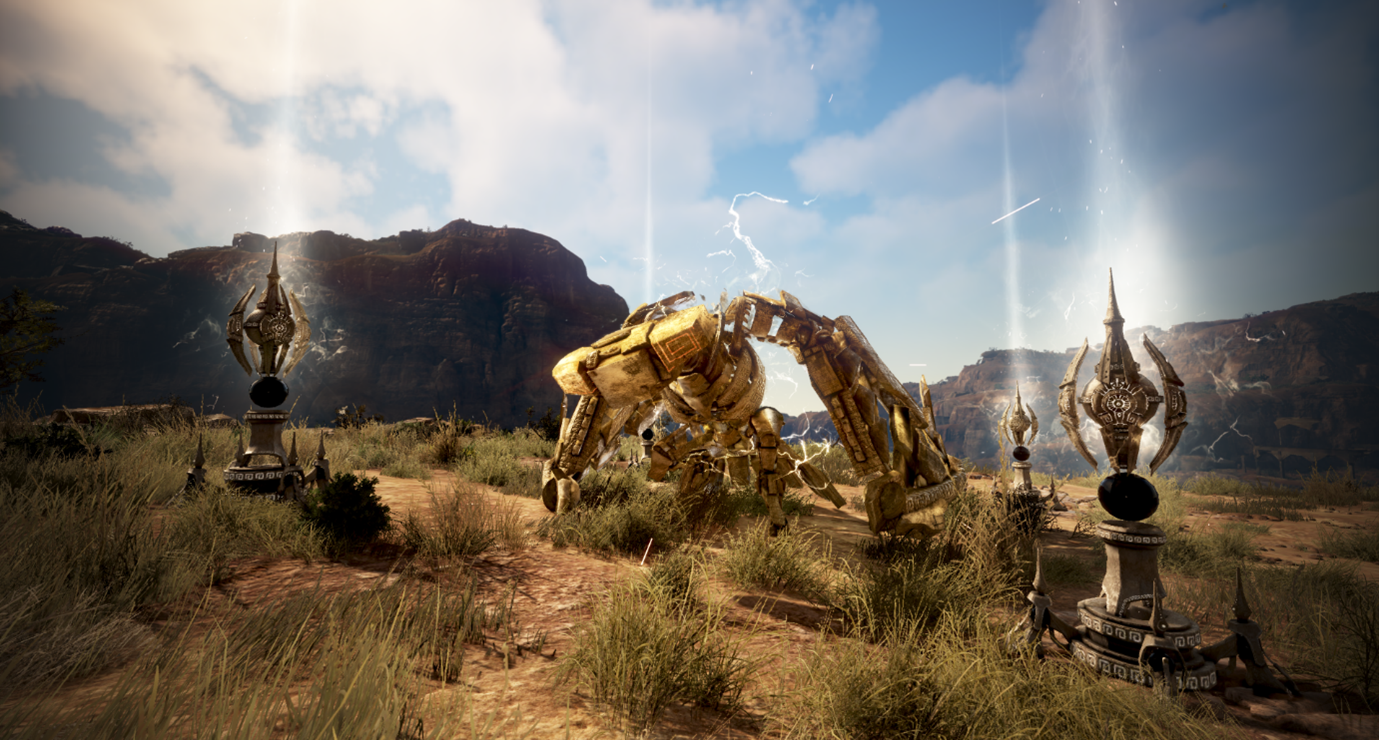 ● Fixed the issue with the landing animation of Ancient Puturum spawned from Dark Rifts after certain attacks.

● Changed the location of the guard in front of Ancient Stone Chamber.

● Fixed the Dream Horse Arduanatt to lose its wings if it dies while in mid-air.

● Fixed the issue where Guilds with guild points exceeding 999 wouldn't be displayed in the Guild window.

● Fixed the issue where searching for Dye in the Menu wouldn't display its icon correctly.

● Fixed the issue where the Naive Worker appeared as if they had a Promotion Chance.

● My Gardens window has been updated.

● Fixed the issue where characters would look awkward in certain situations while wearing the following outfits:

● Fixed the issue where the rowboat would sink underwater when attaching Belle Epoque Hull.

● Elaborated the description of item “Golden Pouch of Fortune.”

● Fixed the issue where the description for Combat Assistance in Settings would overlap with Navigation Guide Type.

● [Lahn] - Fixed the issue where beauty album could not be applied in the Beauty window.

● [Lahn] - Fixed the issue where features related to character actions would not work properly in the Beauty window.

● Fixed an issue where some backgrounds would be displayed abnormally