● Defeating the following monsters on the Season Server have a low chance to draw out Afuaru.
- Defeat Afuaru to obtain Tuvala Ore or Refined Magical Black Stones, along with a low chance to get a ‘Frozen Tides Black Stone,’ which grants guaranteed TET(IV) to PEN(V) enhancement of Tuvala Gear. 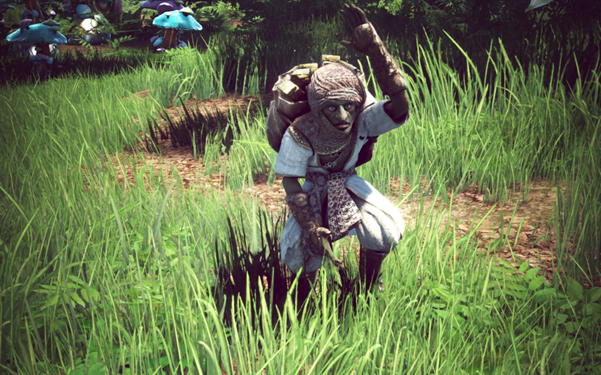 Season servers will now have their own exclusive version of Afuaru. Up until now, Afuaru served as a breath of fresh air for Adventurers while they were defeating monsters on the normal server, for he had a chance to drop some of the ‘best’ items in the game. And now, Afuaru has a whole new bag of goodies to be plundered from as he makes an appearance in Various locations throughout the season servers. Afuaru in the season server will drop either Refined Magical Black Stones or Tuvala Ores, along with the rare chance to drop the much-coveted ‘Frozen Tides Black Stone.’ The ‘Frozen Tides Black Stone’ will grant guaranteed TET (IV) or PEN (V) enhancement for Tuvala gear. Starting from this week, he will first appear in normal monster zones, while in the upcoming week, he is scheduled to make an appearance in monster zones recommended for parties on the season server (I,e. Shultz Guard, Basilisks, etc.) as well.

- Changed the appearance location of the field boss Dastard Bheg to Balenos Forest .

※ As the field boss, Dastard Bheg was disabled for a short period of time, ‘Dastard Bheg’ will appear one more time after being defeated until the July 21st maintenance (UTC+1).

● Absolute: Ultimate Righteous Charge-  Fixed an issue where the PvP damage of the skill was lower than intended.

● Flashing Light – Fixed the issue where the backward movement of the skill would be shorter if it was used after a particular motion of Bloodthirst: Katana Shower.

● Fixed an issue where pressing A/X after using Brace, while Prime: Smoke Screen is on cooldown, would cause the character to temporarily freeze.

We also felt Mermaid skills were weak when it came to combos. So, we made changes to allow smoother comboing with other skills and also adjusted attack range to make them easier to perform. We also tweaked the Whirling Slash and Storm Surge skills as these attacks were difficult to land on targets. We noticed it was particularly difficult to land hits with Whirling Slash as it didn't have any collision, so we changed this skill to include collisions when performed moving forward. This will enable forward-moving attacks to land on targets more easily, but note that the sideway attacks will still not include collision with targets. As for Storm Surge, we removed the start-up motion so that the skill activates quicker.

● Fixed the issue where Corsair would not start auto-running when L3 is pressed while stopping to move forward in combat stance.

● Storm Surge – Improved to combo smoother with skills and movements.

● Wipe Out – Fixed the issue where pressing the commands for the skill after using Splashin’ Around and Mareca: Jet Stream would activate Overflow instead.

● Flow: After the Storm – improved to be able to combo with the skills Whirlpool, Crashing Wave, and Mareca: Spiral Soak

● Flow: After the Storm – Fixed the issue where pressing the commands for the skill after the 2nd hit of Wave Lash would activate Crashing Wave.

● Prime: Wave Lash I~IV – Fixed the issue where the damage was not applied when the skill is used on the spot while on cooldown.

● Prime: Wave Lash II – Fixed the issue where the damage reduction was not being applied when using the skill while sprinting or when comboing after Riding Waves.

● Wave Lash – Changed to no longer move forward when using the skill while sprinting.

● Mareca: Sea Stroll – Improved so the character to face the same direction as the camera before the last strike.

● Improved her motion to appear smoother when stopping to move in combat stance.

● Riding Waves – Changed to now combo into Wave Lash and Ocean’s Pearl regardless of the direction in which the skill was used.

● Smooth Sailin’ - Improved so the skill can now be used on cooldown.

● Smooth Sailin’ - Improved to be able to combo with Tidal Slash and Ocean’’s Pearl during the skill.

● Smooth Sailin' - Improved to combo smoothly with Wave Lash when using the skill left or right.

● Smooth Sailin’ - Improved to link more fluidly from other skills.

● Prime: Wave Lash I~IV – Fixed the issue where the sound effect would not be played when using the skills during their cooldown.

● Flow: Squall – changed to activate when used during cooldown.

● Crashing Wave – Changed to activate Storming Gale when holding L2+X/LT+B when the skill is on cooldown.

● Whirling Slash – Changed to have no collision until the rope is thrown when the skill is used moving sideways.

● Ocean’s Pearl, Mareca: Whale Song – Adjusted the attack range to be able to hit targets near and to the side of the character.

● Splashin’ Around – Fixed the issue where the character would attack diagonally when moving left, right, or back while using the skill.

● Prime: Heirloom of the Crow – Changed to increase the attack range for every level of the skills Overflow and Flow: Tide’s Kiss.

● Prime: Mareca: Spiral Soak – Improved to combo with Mareca: Whale Song after the second hit of the skill.

● Mareca: Spiral Soak - Improved the 2nd hit to apply its effect to all targets regardless of the attack range.

● Riding Waves - Improved to combo smoothly with Mareca: Spiral Soak during the skill.

● Fixed the issue where other skills could not be used if a skill was activated using the Ring Menu in a non-combat state.

● Crashing Wave – Fixed the issue where the 1st hit damage was not applied in certain situations.

● Changed the damage of the following skills.

● Sea Lungs – Can now be acquired from level 1.

● Mareca: Spiral Soak I ~ Absolute: Spiral Soak – Fixed the issue where the 2 hit damage description regarding max hits was different from how it was applied.

● Poses 1 and 2 have been changed in the character Beauty window.

● Work time for the Star’s End excavation node has been reduced by around 50%.

● The probability of acquiring a Mass of Pure Magic from excavation in Star’s End has been increased to 100%.

● The weights of the five different materials needed to enhance Naru and Tuvala gear were reduced to 0.1LT per x1000

Keeping enhancement materials for your Tuvala Gear in your inventory feels better than placing them in your storage, since you would naturally want to use them when you’re ready to enhance. However, keeping a hefty amount of these materials on you can place quite the burden on your character. Thus, we decided to adjust their weight (0.1LT per 1,000 items) to be less cumbersome.
View list