As previously announced in our "A Letter to Black Desert Adventurers", the Black Desert team has been discussing the possibility of adjusting the Season Servers to lighten the progression hurdles and help newer Adventurers settle into Black Desert. With this purpose in mind, we’ve decided to conclude the Summer Season early during the September 29th Maintenance (UTC+1).

But don't worry! This farewell to the Summer Season will be followed up by a new "Season+" server on October 15th. The new "Season+" server is a bolstered version of the previous season with improved Tuvala gear enhancement chances along with more boosts between the graduation stage and end gear progression. This revamp is also particularly meaningful to the staff in that it embodies our best efforts to reflect the Adventurers’ needs and suggestions voiced out to us.

We sincerely hope that the Season+ servers can deliver the renewed adventures that we hope for you to experience.

So, get ready to jump right in and join the new Season+ servers!

- All Summer Season characters will be converted to ‘Normal Characters’ during the September 29th maintenance.

- All ‘Season Quests’ in progress will be removed as well.

The Black Spirit Pass will be removed from the PlayStation and Xbox stores on September 29th 07:00 AM (UTC+1).

- The Season Pass and Black Spirit Pass will both end during the September 29th Maintenance (UTC+1), so be sure to claim your rewards beforehand.

*The above challenge is scheduled to be removed during the September 29th Maintenance (UTC+1), so please make sure to receive all challenge rewards before the maintenance.

- You will be excluded from the compensation if your Summer Season character has been deleted or no longer exists during the September 29th Maintenance (UTC+1).

Summer Season Tuvala gear that have not been converted with conversion stones will be automatically converted and returned to Adventurers during the September 29th Maintenance (UTC+1) following the criteria below.
* (Tuvala gear for equipment slots that was already converted will not be sent to you.)

* Any Tuvala gear that is excluded by the criteria above will not be recoverable.
* Tuvala gear that have been converted this way will be placed in the Inventory of the character that graduated from Summer Season. However, if your Inventory is full, then the gear will be sent to your Heidel Storage.

The goal of the new Season+ server is to alleviate the progression hurdles for newer Adventurers, but we also plan to gradually expand the various boosts so that even veteran Adventurers feel more comfortable when settling into their new season character.

① Upon completing the Serendia main questline, you will be able to obtain an additional pet on top of the one you already received (once per family).

② Drops in the Mediah Region will be reorganized.

③ Rewards from main questline will be updated with better rewards

④ Monster zones in Valencia will be greatly improved.

Enhancement chances will be adjusted in the Season+ server to make Tuvala Gear easier to enhance.

After graduating from the Season+ server, the seven different types of PEN (V) Tuvala gear can be exchanged for TET (IV) Boss gears that cannot be traded on the market.

Right now, you might be wondering what the benefit is when you trade in a Boss gear for a one that can’t be traded on the market. Not to worry! These newly exchanged Boss Gears will offer a new way to be enhanced to PEN (V) level with steady effort!

Refer to the image below to see how the new system works. 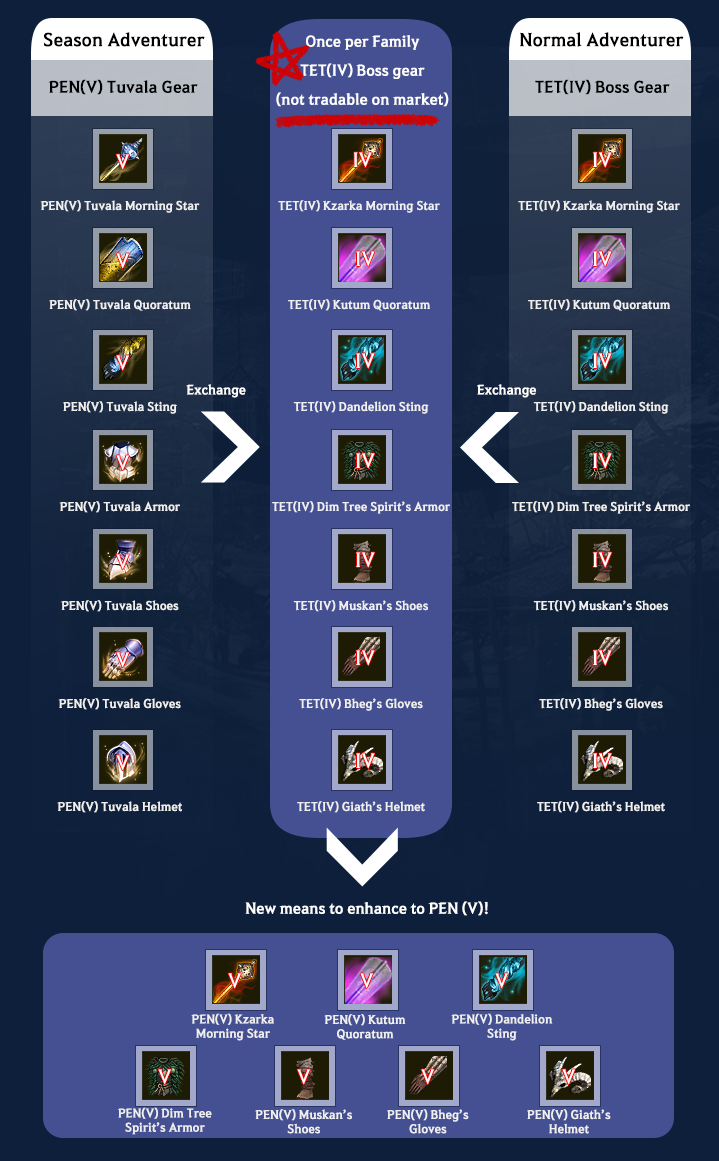 ▲ You can obtain TET (IV) Boss Gear for all seven of the equipment slots (Main Weapon, Sub-weapon, Awakening Weapon, Armor, Shoes, Gloves, and Helmet) via exchange. Afterward, you can try to enhance the obtained Boss Gear to PEN (V) with the new way that will be introduced in Season+. Additionally, all PEN (V) Tuvala Gear that has been previously converted can be exchanged for TET (IV) Boss Gear (cannot be traded on market) in Season+.

▲ As this image was taken during development, it is displayed in the Korean language. This content will be translated before it releases, but the contents may be subject to change.

We are currently preparing more announcements to give you more information about the upcoming updates. Make sure to keep an eye on our website for more notices regarding Season+ and all the contents & events that we have in store!