We’ve had one Season, but why not a second season? That’s right, the Season+ servers are making their way to Black Desert, bringing improved Tuvala enhancements, a new season pass and once it’s all done, a new way to learn more of the ropes of Black Desert. Check out all the details of the upcoming Season+ in this first look GM Note!

Season Characters earn special rewards at certain points as they level up! Season+ offers a wide array of rewards, including Adventurer Shoes and enhancement materials, which will really put a spring in your characters steps! Make sure to check out the Season Events notice when Season+ launches October 15th UTC+1.

How to Create Season Characters 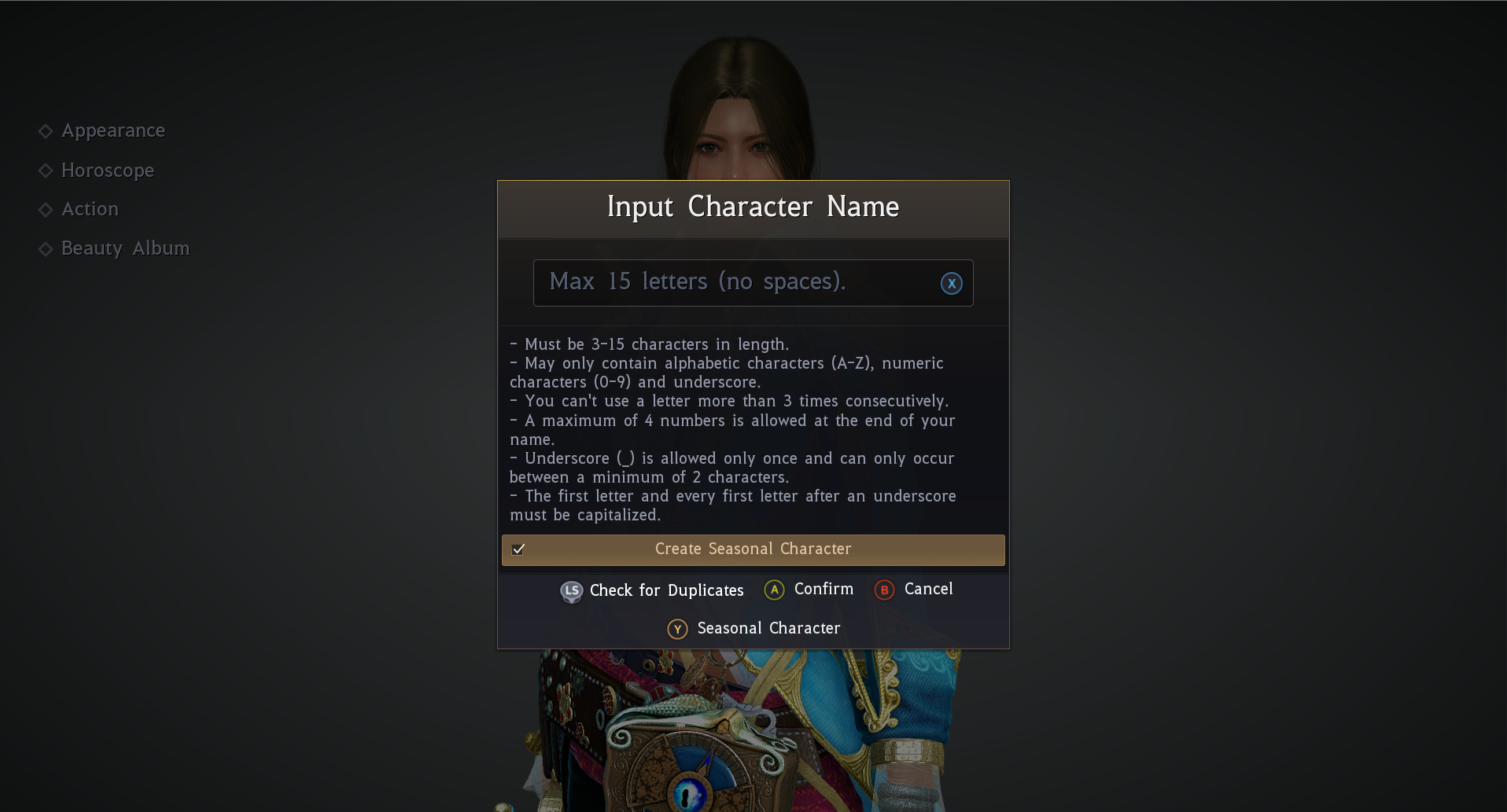 Decide carefully which class you wish to begin with because each family can only create one character in the season server. If you wish to change over to another class, you have to delete the previous season character and begin again or use Fughar’s Timepiece.

to show that they’re a Season Server specific character

With Season Servers focussing on character growth, we’ve cranked up the heat and added a 24/7 Combat and Skill EXP buff to really get your characters rolling.

※ Hot-time event applies to all servers, including Olvia.

※ In the case of Olvia servers, the Hot Time event buffs will replace the natural Olvia buffs, not stack on top of them.

※ The weekend Hot Times do not stack with existing Hot Times (weekdays).

■  How to acquire Tuvala Gear

Tuvala Gear is a special kind of equipment that can only be equipped by season characters! ‘Tuvala Gears’ are an excellent way to accelerate growth for Adventurers in the Season Server so be sure to get them as fast as you can.

Once you reach PEN (V) level with your Naru gear, go speak to Crow Merchant Chief Manager Fughar. He’ll exchange your PEN (V) Naru gear for a PRI (I) Tuvala gear of the same part!

There are two main ways to obtain Tuvala Gear.

While Time-filled Black Stones can enhance any item of Tuvala gear at any level, the Refined Magical Black Stone guarantees enhancement from +15 Tuvala to TRI(III) Tuvala gear. While using Refined Magical Black Stones, you will consume more durability than regular enhancing, so you’re going to need to make sure you have plenty of Tuvala Ore on hand in order to repair the maximum durability at the Black Smiths across Black Desert.

During this Season+ window, Tuvala gear will be easier to enhance than before, allowing you a much more pleasant route to graduation, so keep this in mind when reading on!

Fughar has prepared a special Tuvala gear quest for the Season! He's offering to give an Advice of Valks everytime you meet the enhancement requirements. 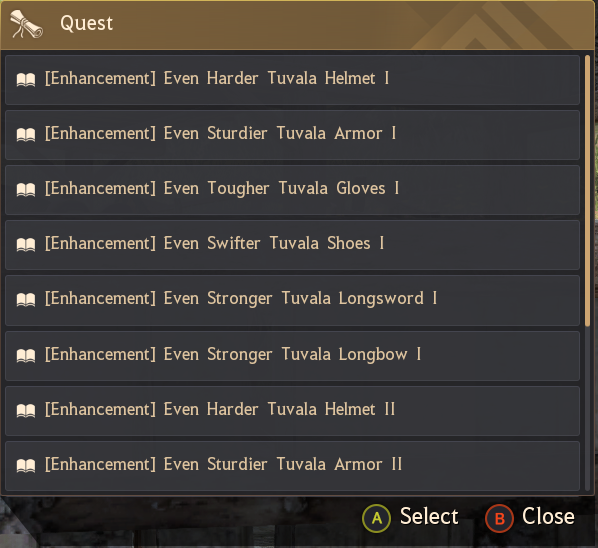 There are a total of 7 Tuvala gears, one for each body part and each gear will have a respective quest reward of its own. After receiving these quests from Fughar, equip the Tuvala gear with the right enhancement level on your character. It’s as simple as that to complete the quest!

To make your season server experience even more unique from what you’ve experienced before, the Simplified Main Questline makes its return to Season Servers. This is especially good news for those of you who have already had a good run of the main quests and want to get right down to business!

* Please note that the choice to go through the simplified questline or the entire main questline is irreversible.

Adventurers who have met the requirements above and have progressed through the main quest up to ‘The Sage of Velia’ with a season character can accept the simplified main quest.

Check out the ‘[Event] Season Pass (feat. Sunset Maple Leaves)’ notice for more information about the Challenges and rewards!

Worried that you might miss on the Season Pass rewards because you chose the Simplified Main Questline? Not to worry! These quests will pop as you level up, and completing them will automatically reward you with certain Season Pass Challenges.

* If you progress through the simplified main questline, you can talk to the Black Spirit to receive the “Normal Season Pass” rewards after completing a quest.

Ever felt like you wanted to change classes midway for your Season Character? If you started a Season Character with Class A, and changed your mind, you have an opportunity to change to Class B without having to start over again! All your Combat EXP and Skill EXP will be transferred over to the class you’ve selected!

* Adventurers who obtained Fughar's Timepiece will again be able to obtain it in Season+.

* Quests that are in progress or completed on Class A will not be transferred to Class B.

Also, the Class B character that you wish to transfer the season character status to must be Lv. 25 or lower to be transferrable. (Class A must be connected to a normal server with all their gear unequipped.)

Did you start the Season+ with guildmates or friends?

In this season, three areas were changed to “Party Monster Zones.” (Normal and season servers!) Take this chance to party up with your friends and stack up loot together!

※ Once Season+ ends, these monster zones will revert back to their original state.

To help reduce our Adventurers’ game progression, we’ve made it easier to enhance Tuvala Gear! First, we’ve decreased the number of Refined Magical Black Stones and durability that was consumed by a guaranteed enhancement of Tuvala weapons or defense gear.

All these changes come together to make it easier than ever to enhance your Tuvala gear and accessories during Season+!

Previously, you had to use a [Season] Boss Gear Exchange Coupon, which you can only use to exchange Tuvala Gear for one piece of Boss Gear. In Season+, there is no longer a [Season] Boss Gear Exchange Coupon; instead, you’ll be able to exchange all 7 equipment slots of Tuvala Gear for TET (IV) Boss Gear (that cannot be listed on the Central Market) once per Family. This change will be available after the October 27th Maintenance (UTC+1).

Armor enhanced to PEN (V) this way can be used to craft the Fallen God’s Armor, which can also be listed on the Central Market!

Worried about what happens after you graduate from Season+? There’s no need to worry because the Growth Pass will help you progress through Black Desert’s many contents! The Growth Pass will be made available to any Season+ server graduated character, free of purchase. This will be available after the October 27th Maintenance (UTC+1).

As you kick back and enjoy these Hot Time Buffs, you’ll also be rewarded for reaching certain milestones. These Levelling Aid Boxes offer Combat and Skill EXP buffs, Time-filled Black Stones and more!

We hope you feel ready to start your adventure on Season+! Happy adventuring!