Thank you for your continued patience as we continue to roll out the updates for the second half of 2021. Today, we’re going to look at some of the content that is planned, as well as provide a preview into the contents of this week’s update.

From the last week of October, you will be able to graduate from the Season+ servers. Along side graduation comes the ‘Progression Pass’ and the ‘Guaranteed PEN (V) Boss Gear Enhancement Method.’

New Adventurers who just recently started may be a little confused as to what they should do after graduating from the Season+ servers. The Progression Pass contains goals and objectives that are not overly difficult, but will help give you directions on where your adventures should take you next.

▲ As this image was taken during development, it is displayed in Korean. This content will be translated to the supported languages before it releases, but the contents may be subject to change.

Next up is probably what most Adventurers were waiting for: the path to guaranteed PEN (V) Boss Gear.

Now, with the help of the Old Moon Guild, you will be able to acquire PEN (V) Boss Gear through a new method! 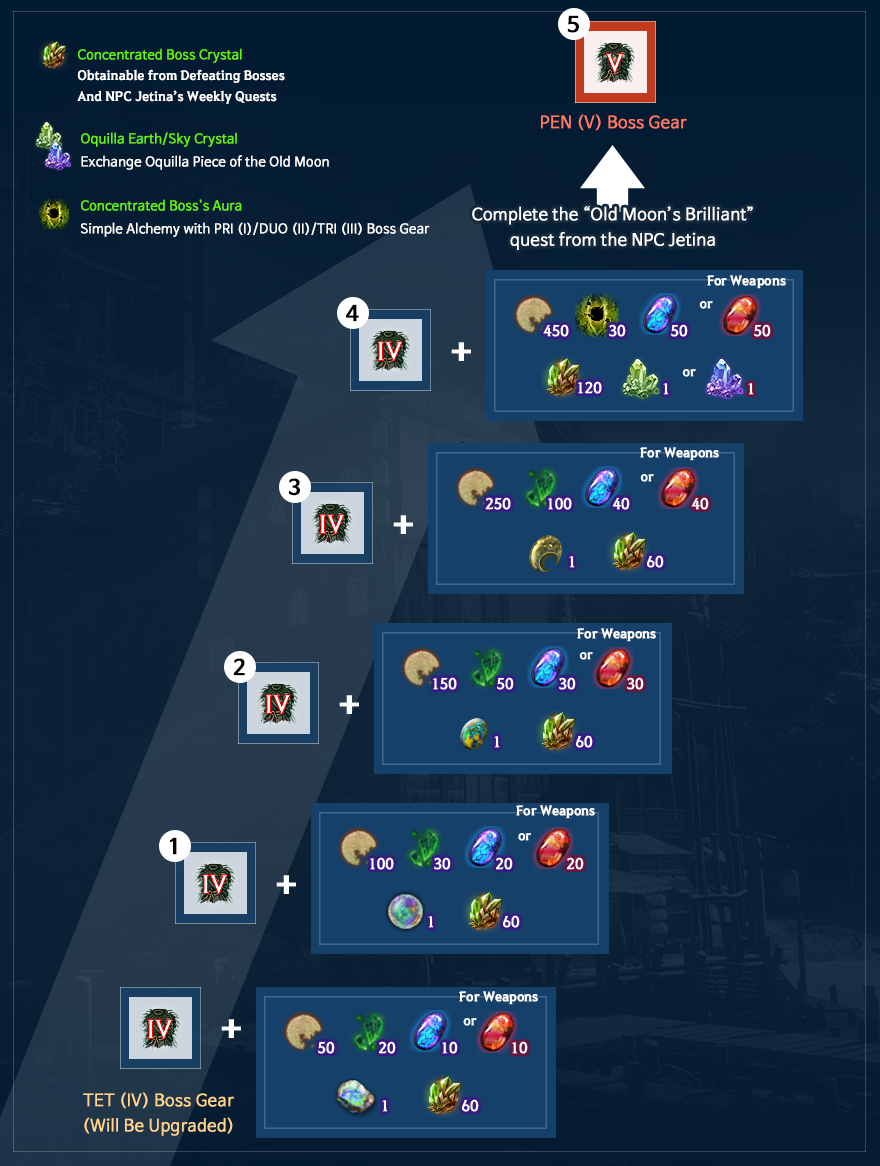 Until now, the only way to obtain PEN (V) Boss Gear was to either purchase it from the Central Market or to enhance it yourself. Now that a new method has been introduced, we hope that you choose the method that best fits you.

However, PEN (V) Boss Gear is seen as the greatest of equipment currently available in Black Desert. Therefore, rather than give an easy method to obtain it, the new method aims to provide an alternative option to enhancing or purchasing your PEN (V) gear.

We hope that Adventurers who are still growing in the world of Black Desert pick the path that best suits them, so that they enjoy their time in Black Desert even more.

Speaking of Conquest Wars, the pre-season for Conquest Wars (alongside the Conquest War guild costumes) will begin on November 10th. The pre-season will last about 2 months and if you succeed in your wars, you will be able to earn up to 3 billion Silver. As we draw closer to the release, we will provide more information regarding pre-season and the rewards that you can obtain.

Then, on November 24th, we will aim to apply the new optimization strategy that we have alongside releasing Valencia Conquest Wars.

We hope that Console Adventurers will be able to enjoy Conquest Wars and will continue to work on it so that everyone can enjoy the thrill of Conquest Wars.

Lastly, rather than adding a Guild version of the World Boss Vell, the Guild Raid Boss Khan will be added to Black Desert Console.

In the case of Vell, the conversion from a world boss to a guild boss is taking more time than expected. In order to ensure its complete conversion, a bit more development time required. Accordingly, Vell is currently planned for November and to hold over our sea-faring Adventurers, Khan will be released first.

As there are many people who are eagerly awaiting their chance at fighting Vell and obtaining Vell’s Heart, we will continue to work harder and prepare the updates accordingly. We thank you for your patience and understanding.

In addition, through Social Media, CM Shirna’s and Trent’s update streams, and through the community as a whole, we have been collecting the opinions of all of our Adventurers.

Among the various opinions and suggestions of our adventurers, I would like to briefly talk about some of the things that are currently being prepared.

These things are currently being developed and it is unfortunately not possible to announce an exact release date. However, as soon as it is completed, we will be sure to let our Adventurers know.

Looting on Console is done by pressing Y/△, but the same keys are used for Gathering. However, there has been a lot of feedback stating that this key mapping has been inconvenient when there are no pets or when you start off as a new Adventurer.

We are currently working on a function where holding Y/△ will allow you to “continuously” acquire loot/Gatherable materials based on your position. If this function is fully developed, then it will be possible to both Gather and manually loot more comfortably.

Originally, unlike PC, Black Desert for Console has a viewing angle that makes your character look larger than it would on PC. This was a choice in development to give a more dynamic and enjoyable experience when playing on a gamepad.

However, many Adventuers have expressed that this viewpoint is uncomfortable in certain situations and that they were not able to control the camera nor save their preferred settings.

Therefore, when the field of view is directly adjusted, we are working on storing that setting into the character. Additionally, when in a town for example, we are also considering changing the default key setting to make it easier to control the camera without having to press on RS/R3.

Finally, it is taking more time than initially expected as we continue forward with the road map, whether it is due to the development workload for said content or due to developing new ways to optimize the game. It is for those reasons that the contents of the road map (which was released earlier in September) is being somewhat adjusted.

We know that Adventurers have been waiting patiently for the updates listed in the road map, so we would like to introduce the content that can be brought earlier than originally intended, to console.

We apologize and ask for your understanding that the schedule may change depending on a variety of situations. As always, we thank you dearly for your passion and continued support for Black Desert Console. We will do our best to repay that favor.