This update brings Season+ Graduation, the Progress Pass, Mediah Node and Conquest Wars and also the Guild Boss, Khan. Not only this, we’re also introducing a new system that will allow you to get guaranteed PEN Boss Gear, so read on to find out more!

●Fughar has begun helping Season+ characters graduate and adjust to the normal server with the Season+ Graduation.

- The path to graduating on Season+ is as follows.

For more information on Season+ Graduation, please check out the GM Note here!

Added the Progression Pass which, along with the Season Servers, aims to help New Adventurers adjust to the diverse content available in the world of Black Desert. 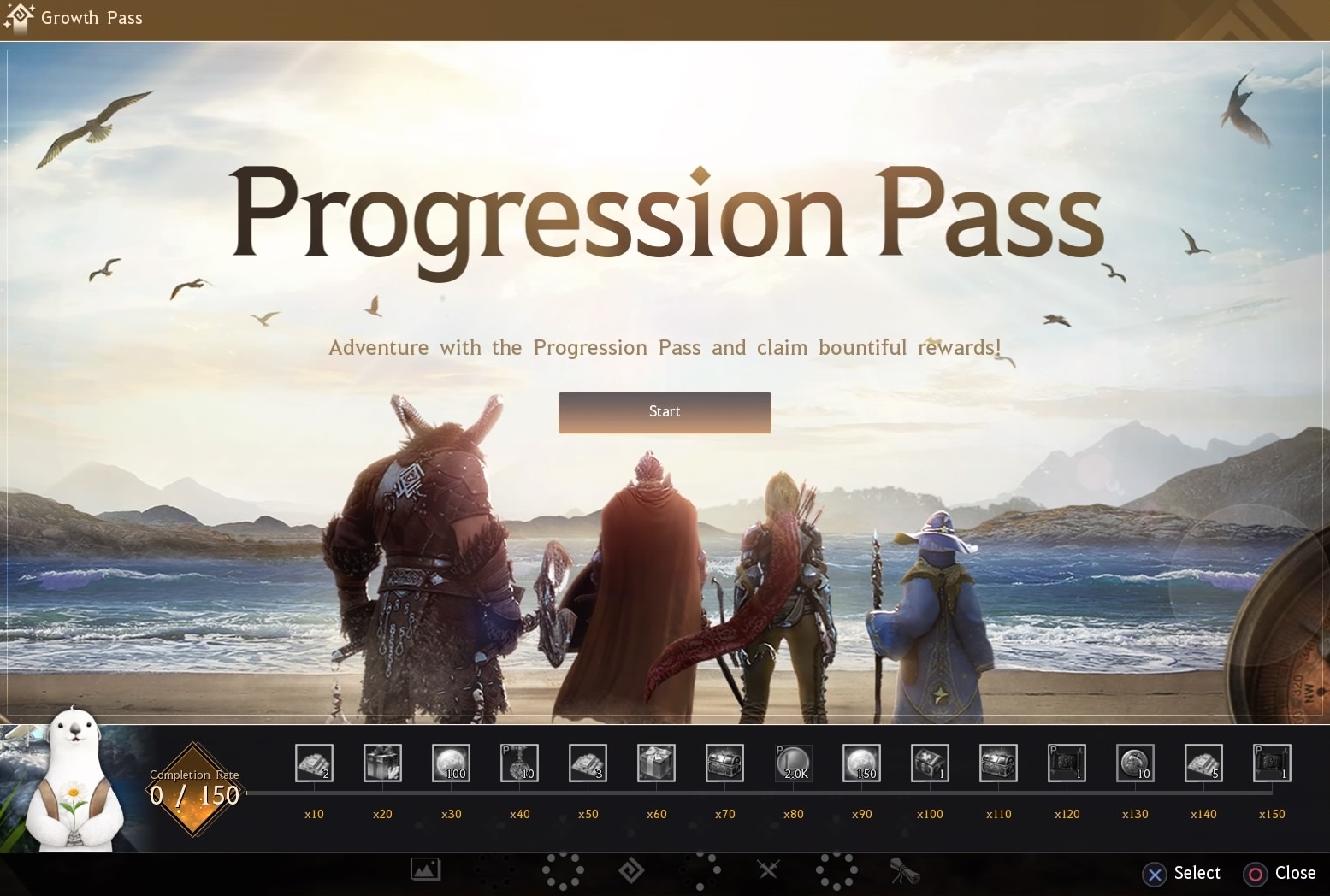 - The Progression Pass is divided into eight categories that include Quest/Adventure Log, PvE, Farming/Cooking, Hunting/Butchering, Training, Game Tips and Guaranteed PEN (V). Completing these categories will not only increase your in-game knowledge but also greatly help you with adjusting to the game.

- Please note that you cannot proceed with the Progression Pass using a Season Character.

* You cannot complete the [Main] quest objectives with a character that has either proceeded with the Simplified or pre-revamp Main Questline.

- You can obtain rewards each time you complete an objective within a specific category.

- You can also earn up to five types of rewards depending on the number of objectives you've completed per category, for a maximum of fifteen different reward types based on your overall progress.

- If an objective contains a scroll () icon, it will refer you to the relevant Adventurer's Board post with more information. 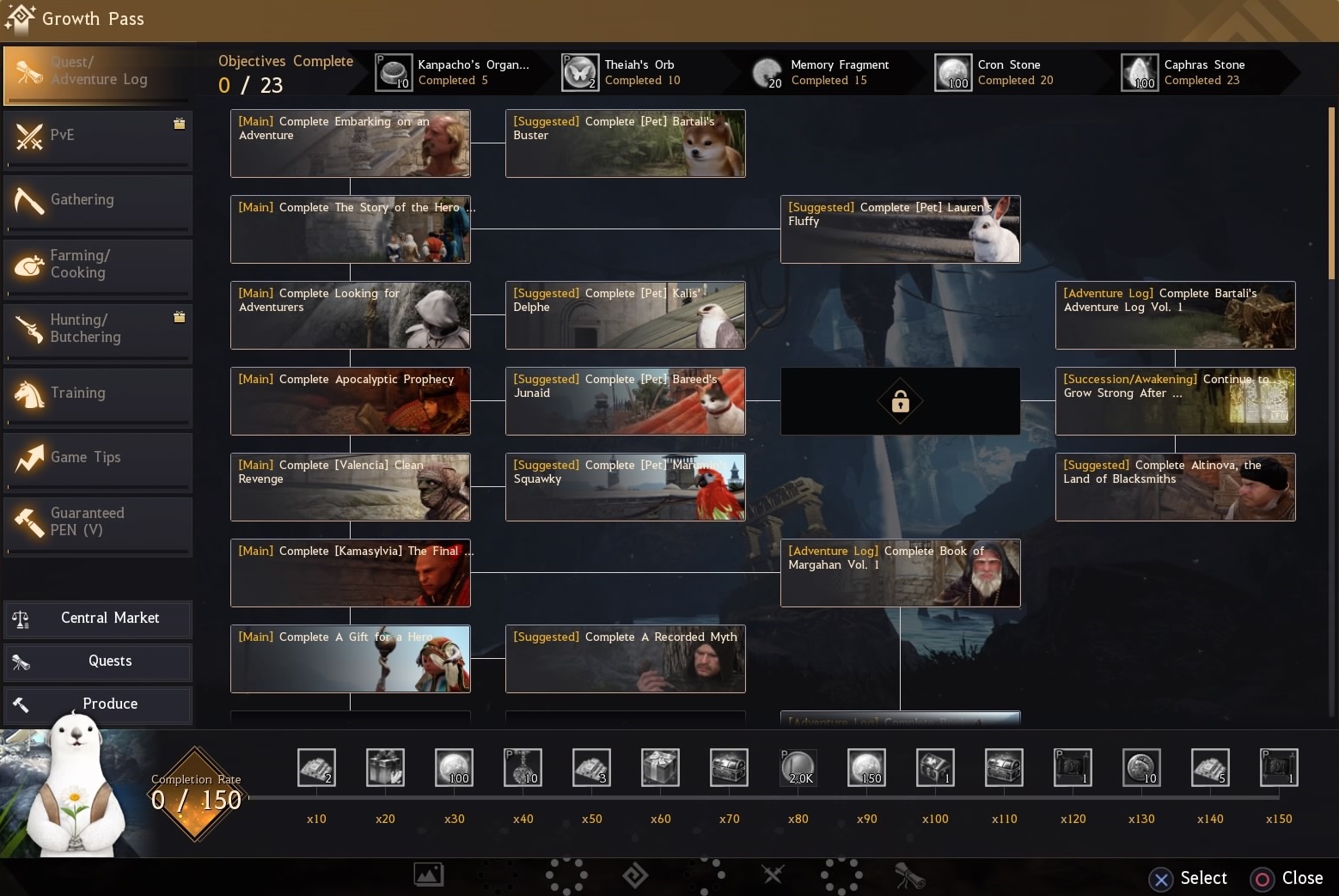 - You can obtain the following rewards according to the number of Progression Pass objectives completed per category.

- You can obtain the following rewards for the number of Progression Pass categories completed.

Hot off the heels of the PEN Accessory Questline, Jetina is doubling down and offering a new deal for Adventurers. Found in any major city, Jetina now offers quests pertaining to each equipment slot to be completed once per Family for a guaranteed opportunity to obtain PEN (V) boss gear.

- Once these quests have been completed, the quests below can be proceeded with once per family. Please make sure that the items you wish to exchange are not equipped, and currently in your inventory.

- Once you accept Jetina's quest, she will grant you a new piece of TET (IV) boss gear which she'll have you upgrade with the Old Moon's Resplendent Reform Stones to draw out your gear's untapped potential.

- Gear that has been Caphras enhanced or gear with socketed crystals cannot be excahnged.

* If you have 2 items of the same name and type in your inventory, the item that appears first in your unsorted inventory will be used. This means that if this item has Caphras enhancement levels, you will need to unsort your inventory, and switch the position of your items.
- Shai's cannot complete the awakening weapon questline with their Talent weapon, the Sol.

● Added the following quests to the Yisar Pjetyo in Tariff available once for every gear slot per Family
to exchange an non-upgraded piece of boss gear obtained through Jetina.

●Once you've obtained an upgradeable TET (IV) boss gear from completing the quest mentioned above, you'll be able to upgrade it from Reform Levels I to V with Reform Stones specific to each piece of gear.

- Each piece of boss gear will require a Reform Stone specific to each equipment slot. There are five Reform Stones from Reform Levels I through V, and using each will upgrade the Reform Level of your TET (IV) boss gear.

●Upgrading your weapon or armor with a crafted reform stone will add the following effects per reform level.

※ You can differentiate between the reform stones' levels by the borders of their icon.

- You can use Processing>Grinding on these Reform Stones to re-obtain the base ingredients.
- You can obtain knowledge on the ‘Resplendent Weapon Reform Stones’ when creating them through heating.
- The crafting method (via Heating) of reform stones for boss weapons are as follows.

- The crafting method (via Heating) of reform stones for boss defense gear as follows.

※ You will require Concentrated Boss Crystals from the same boss as the type of gear you're trying to upgrade with the Reform Stone.

(For example, if you're trying to craft a Resplendent Kzarka's Main Weapon Reform Stone, you will need Concentrated Kzarka Crystals.)

※ Items relating to the production of the materials for the PEN(V) Gear system were removed from the Central Marketplace during the September 29th maintenance, and was returned to your Central Market storage.

●Changed the following items so you can now store them in your Family Inventory.

●Added Concentrated Boss Crystals and Boss's Latent Auras to the loot tables of the following bosses.

- Boss's Latent Auras that dropped from defeated World Bosses remain the same as before.

- Boss's Latent Auras can be obtained by defeating bosses from normal/awakened boss summon scrolls according to a set probability but are guaranteed drops from defeating world/field bosses, and Dark Rift bosses.

* The probability of obtaining Boss's Latent Auras from Kzarka, Nouver, Kutum, Karanda, Offin Tett, and other world bosses remain the same as before.

※ You can only use Simple Alchemy on boss gear that can be registered on the Central Market.

- You can accept the following quests from Jetina to obtain the Oquilla Sky Crystal or Oquilla Earth Crystal, which you will need one of per equipment slot to craft the relevant Reform Stone.

- You can purchase Oquilla's Piece of the Old Moon from NPCs located in any major city for 50,000,000 Silver.

- You can use the ‘Find NPC’ function that can be found in your start menu to find the location of your nearest Old Moon Manager NPC.

●Once you've upgraded your TET (IV) boss gear to Reform Level V and have it in your Inventory, you can talk to Jetina to proceed with the "Old Moon's Brilliant" quest for the relevant equipment slot.

- Upon completing the quest and handing in your TET (IV) boss gear, you'll be rewarded with the same boss gear enhanced to PEN (V) along with an Item Brand Spell Stone x1 and Crystal Extraction Tool x2.

●Mediah has been added to the active Node and Conquest Wars.

※ After the Maintenance on October 27th, taxes will begin accumulating for the Mediah Region and Node Wars, and taxes will be less for the first week.

The Eye of the Ocean, Khan

A new guild boss, Khan, has been added.

● You must collect 5 Summon Scroll Pieces, collected through subjugation quests, in order to summon Guild Boss Khan.
- Khan can be summoned once per week at Oquilla’s Eye, located north of Lema Island. Only one Khan can be summoned at a time on a sever, and the boss will despawn after 30 minutes, regardless of the current battle situation.

- [Guild] Monsterbane cannons have different modes of fire. They can fire regular shots, overcharged shots and rapid fire. Use these to your advantage.

●With the arrival of the new Guild Boss Khan, Kahn’s Scale and Khan’s Tendon can now be acquired through this fight.
- Khan’s Scales and Tendons are used in the creation of Blue Grade Ship gear.
- Please refer to these patch notes and this GM note to learn more about ship gear

- As a result, the duration of the Oog MK3 has been shortened to 3 minutes.

●[Marni’s Suspicious Playground] Fixed an issue where it was possible to have an unrestricted view in the House of Horrors.

●[Marni’s Suspicious Playground] fixed an issue whre players would not be released from the ‘House of Horrors’ when removed from the Mysterious Jack.

●[Marni’s Suspicious Playground] The area near the entrance of the ‘House of Horrors’ has been changed to a safe zone.

●Fixed an issue where in certain circumstances, the ‘Maleficient Centilutos’ would not reset correctly in Sycrakea.

●Fixed an issue where Maleficient Centilutos would not appear in Sycrakea.

●Fixed an issue where when getting off a horse and being hit with a Crowd Control skill your character would be locked in an abnormal state.

●Fixed an issue where Axian would not enrage in certain situations.

●Changed so that you cannot obtain the "Ancient" tagline, have the creator's name branded, or obtain a special title when you craft an Ornette's/Odore's Spirit Essence.

- Items with the "Ancient" tagline will still drop as items you obtain from defeating monsters even after maintenance on Oct 27th 2021.

●Changed the Color of the text in the tool tip description for the Lumbering Axe and the Butcher Knife.

●The 'Marni's Gear Box' that are found in the Marni’s Suspicious Playground have had their text modified.

●The awkward locations of the Camera for certain Halloween event areas have been fixed.

●The ‘Dark Portals’ that appear in quests have been relocated in the following quests.

●Changed certain alerts to no longer be displayed while playing the following minigames.

●Log-in and Server selection windows have been changed to fit the Halloween theme.

● Re-registration function has been added to the central market.

- This will allow you to re-register your goods to the Central Market without having to cancel, find the item, then relist one more time. 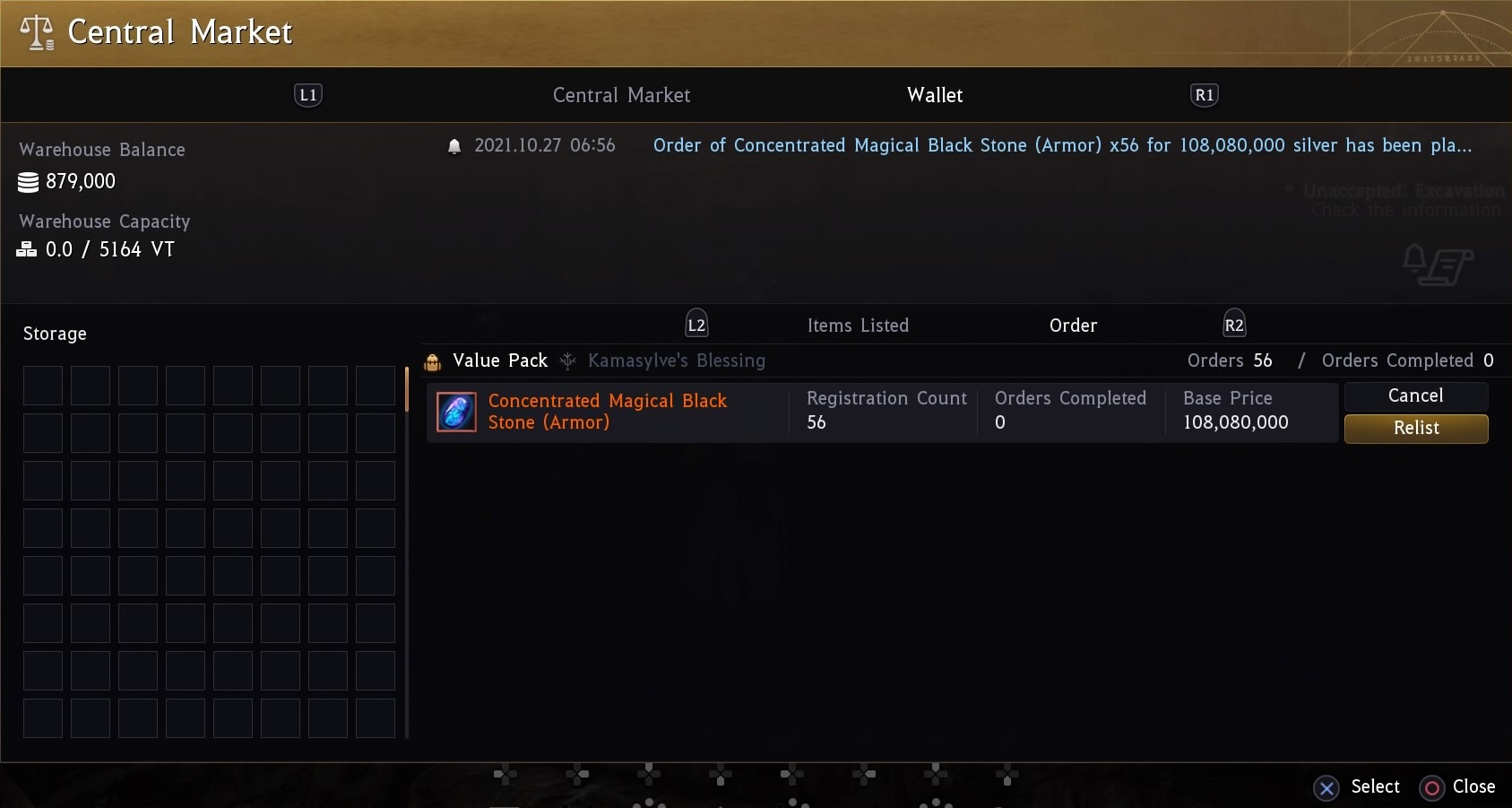 ●Added the Rulupee Server to the European and Asian servers.

●FIxed an issue where Marni Stones would not update regularly when used with the Item Count Function.

●Fixed an issue where the Marnist Outfit for female classes would appear abnormally when dyed in certain cituations.

●Fixed an issue where during character customization, the Lord Red gloves and shoes would not show in certain situations.

●Fixed an issue where the Dark Knight’s hair option number 6 would look unnatural in certain situations.

●Fixed an issue where the Family Name would not be engraved on PEN(V) Boss Gear when that gear was obtained from the [Season] exchange and enhanced from TET(IV).

●Fixed an issue where the Guild Log would not update correctly.

●Fixed an issue where the [Ranger] Sylvia Gloves and Shoes were not appearing correctly on the Pearl Shop banner.

●Fixed the issue where the Phantom of Sherekhan appeared abnormal during the quest ‘The Sherekhans' Approval.’

●Fixed the issue where mass processing materials that do not stack in your Inventory would stop when a message window appears.

●Fixed an issue where the message ‘There is no Awakening Weapon Equipped’ would display in incorrect situations. .

●Fixed an issue where Karma was not decreased when Forced PvP was activated, and attacking/killing other adventurers with a poison mine.