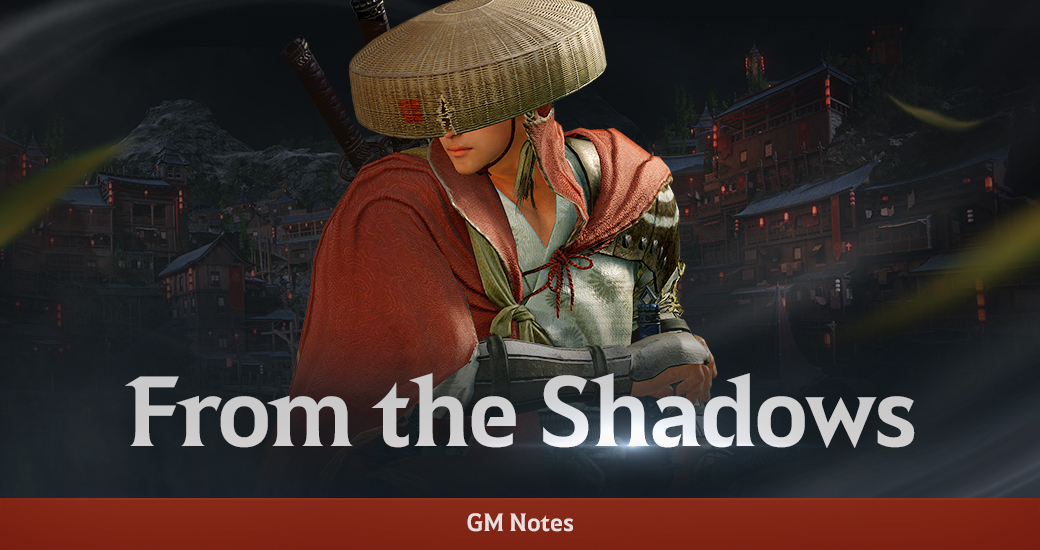 The time has come - Ninja’s assassination skills reach a new peak with his awakening in Black Desert!

Once awakened, Ninja wields the Sura Katana, a set of 6 blades that once belonged to his master. An even deadlier assassin than before, Ninja unleashes a storm of nimble yet lethal attacks to bring his enemies down.

The awakened Ninja will be playable July 24th.

Before you unleash the fury of the Sura Katana, discover the tragic events that led to Ninja wielding the blades of his fallen master.

In a kingdom in the far east, a young boy in tattered clothes lives in the forests of a manor house. He lived alone, surviving on whatever he could forage from the forests. His days would have been nothing but a struggle to survive, if it wasn’t for the young girl of the manor, dressed in beautiful silks, coming out into the forest and playing together. The innocence of the girl saw past the filthy and poor exterior of the boy, as she saw nothing but a friend to climb trees with.

She was a lonely child, and was protected by an old man who acted as her guardian. As their friendship blossomed, the silk-dressed girl offered the boy a place to stay, bringing him back to the manor. The old man who took care of the girl was looking for someone who could continue to take care of the girl when he passed, and through some subtle pleas, the old man agreed to take in the young boy on the condition that he pledge his undying loyalty to the girl’s protection, an oath the boy would quickly make.

Each day the old man would train the boy in the martial arts. Through their conversations, the boy discovered that the guardian was a famous general known for his exceptional swordsmanship. He would wield 6 katanas as easily as most men handle their training swords. His allies revered him, and his enemies called him ‘Sura’, named after the perpetual warriors of their culture.

The boy showed an incredible natural affinity with martial arts, and his almost innate talent grew exponentially under his master. The great Sura training an apprentice drew many eyes from around the kingdom, and before Sura’s passing, many considered the apprentice boy to have far surpassed the skills of his teacher. Yet the boy remained humble, and till the last day of Sura’s life, continued to absorb as many of the skills as he could.

During those years of tutelage from Sura, the boy and the girl continued to be close. They explored the forests together, learned from books and ran through the halls. As they continued to get older, they developed feelings for each other. But such a romance would never come to pass. The boy was nothing more than a peasant, and the girl was the eldest daughter of the Narusawa clan who ruled the region. She was betrothed to a man from another clan to further strengthen their rule of the lands.

But the boy did not care, and when Sura passed, he reaffirmed his oath to protect the girl with his own life.

Shortly after the girl took charge of the Narusawa clan, civil war broke out in the kingdom. Several of the clans’ chiefs were infuriated by the perceived oppression and exploitation at the hands of the central government. The girl became a target during the civil war, and the boy defended her time after time. With his six katanas dripping in the blood of those foolish enough to stand against him, the enemy proclaimed that ‘Sura’ had returned to the battlefield.

After years of bloodshed, peace finally came back to the region. The sacrifices of those who laid down their lives in the bloodshed were remembered, but for the girl and her closest friend, the wars had only just begun.

The victorious lords each claimed rights to the kingdom, their incessant bickering continued for a long time. Those who had fought against the tyranny of the central government, themselves became the tyrants.

The girl, who was now a woman in her own right, drew the attention of the ambitious. The Narusawa house was weakened, and though using her wealth to survive through the civil war, had started to become a target. The once powerful house of the kingdom had become a trophy for the tyrants.

Through his contacts, the boy who was now a grown man himself, came to learn of a plot to bring down the Narusawa clan completely. The young girl was to be framed for treason, bringing great dishonor onto the house and eliminate it completely from the history books. The man felt charged with protecting the remnants of the Narusawa clan, but what good could a wandering swordsman and a small group of followers do? They had few resources left, and the man’s first priority was to forge out a living for his clan.

The young man eventually persuaded the girl to retreat back to his childhood home deep in the forest. They would need to leave everything about their old lives behind them, including the name of the clan that was tied so closely to the nation.

For the man, it meant sacrificing his reputation. He laid down the swords that had served him so well during the civil war. Each sword had a story to tell, each one spoke to his prowess as a swordsman. Yet these long blades would be impractical for the path ahead. He picked up the shortest of the swords, and turned to leave. He knew that one day he would have to pick up the mantle of the Sura again.

He and his men started to work on intelligence gathering, silently finding their ways into positions where they could spy on others. The young woman took charge of classifying the information and finding ways to sell it to keep the now small group alive. Those who were pushed out of their original lives due to power struggles, were now making their livelihood from playing everyone else in the power struggles.

Through all their perseverance, they survived and thrived. They put the Narusawa name to rest, and started to call themselves ‘Ninjas’.

The clan was once again stable, and although the new line of work wasn’t the most legitimate work, they were being paid well for their work. Their reputation landed them lucrative contracts, including work overseas where they would need to gather intelligence on the regional powerhouses Calpheon, Valencia and Mediah.

The members would come and go as they needed to, but one of their ninjas returned home from the west with what seemed to be a minor cold. The clan took care of him, gave him bed rest and tended to his ailment with medicines procured within the kingdom. His eyes eventually turned a vile shade of red, and he lost his grasp on reality. He thrashed out at everyone within the clan, injuring just a few before his life was taken at the hands of the leader.

The infection of the clan was just beginning. More and more of them started to fall to this mysterious disease they called the ‘red curse’. Some blamed their line of work, others thought they were cursed by some unknown witch. What was evident was that the disease did not care about the young, the old or the powerful. It brought everyone to their knees. The leader put anyone affected to the sword without hesitation, until his childhood friend came down with the illness.

He could not put her to the sword, and instead searched desperately for someone who could cure her. When the doctors arrived, the only thing they could do was put her into a coma to delay the change as much as possible. For the first time in what felt like an eternity, she was peaceful and the leader could steal some time alone with her. She was unresponsive, but he still felt her presence as he made his vows.

“I will scour every inch of this world, every corner of even the most vile cities to bring you back. I will take as long as needed to finish this mission for you, but please, hold on until I return. The shadows will no longer belong to me, and I vow on the swords of Sura I will return with a cure.”

With that, he left the room and returned to the armory where he lay to rest the Sura spirit. He was nothing but a shadow, but the Sura’s reputation was legendary. If the people of the west were ever going to help his plight, he would need to once again become the legendary war machine, Sura.

With the Sura Katana, Ninja strategically moves around the battlefield and launches a barrage of attacks upon his enemies. Light-footed and armed with ruthless skills, Ninja is a force to be reckoned with.

Ninja strikes 4 times, ferociously knocking his enemies up and then back down. If Ninja uses this skill after Seamless, he will perform the skill with 2 blades for a maximum 12 slashes!

Ninja draws the energy of the Sura Katana and delivers a devastating upward sweep.