Adventurers,
A new update is here, bring an overhaul of the Balenos Main Questline, improvements with the Central Market and Blacksmith systems, and more! Read on to find out more details about the July 20th Update.

The Balenos main questline, which includes Velia, the hometown of many Adventurers, has undergone a renewal. We've added fully-voiced cutscenes, a graphical makeover for the major NPCs, reorganized the quest pathing, all for the sake of improving our focus on storytelling. We hope this renewal will help our new Adventurers better understand the world of Black Desert, and our veteran Adventurers enjoy a fresh, updated look to the Balenos main questline.
We believe updating existing content to be as important as adding new content, and we will strive to continue with improving the game. 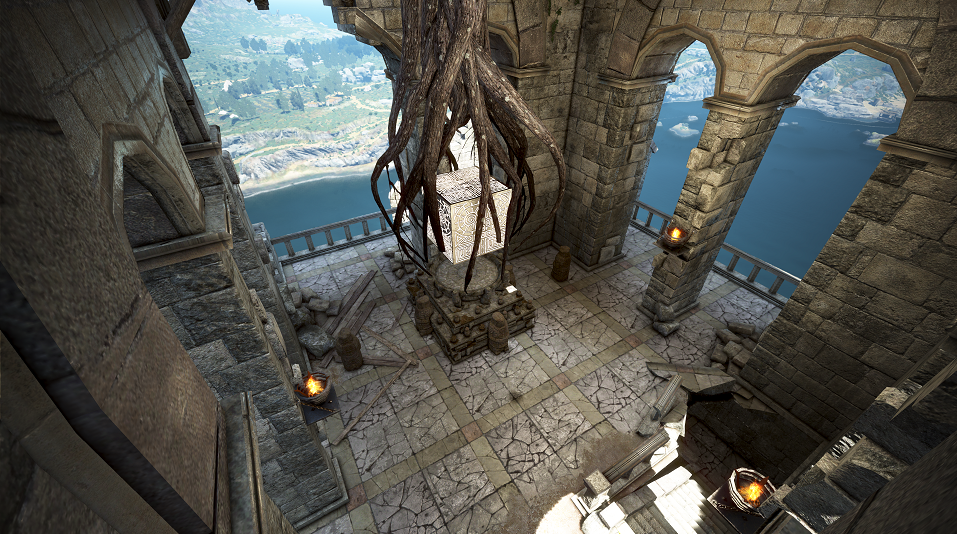 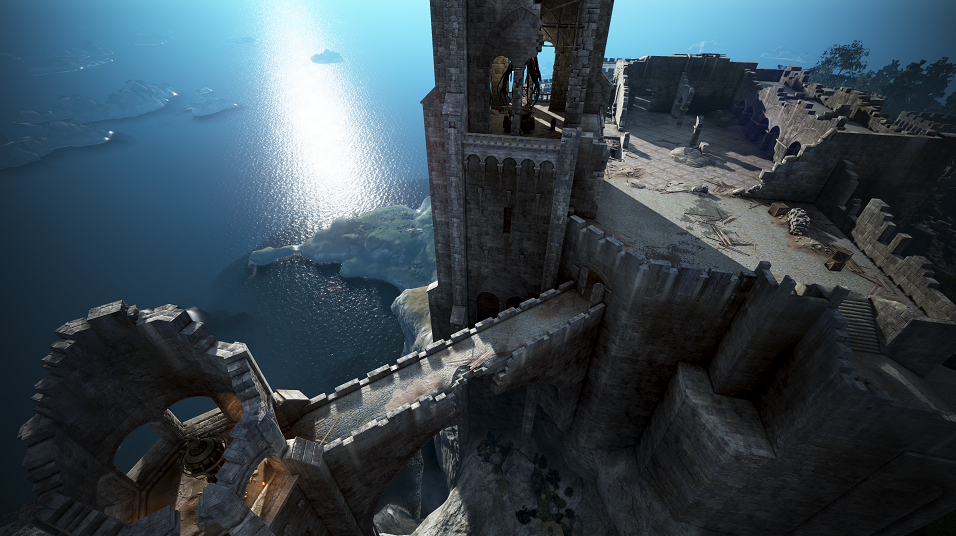 The Dwarven artisans of Gavinya Great Crater have developed a new and improved way to repair and extract items.
The newly improved functions have been spreading across the continent, far and wide, from stable keepers to even the campsites.
Now Adventurers will only need to press the "repair" button once to repair any and every item that is in need of repair. The means of extracting outfits have also been improved.
Before using the "Select All" button and extracting from outfits, please make sure you've locked any outfit/costume appearances you do not wish to accidently extract and destroy.

● Improved the repair function.
- You can now repair all items (equipped, in your inventory, horse gear, ship gear, guild gear) with one button press.
- You can pick and choose which criteria to repair via the cogwheel-shaped settings button on the side. 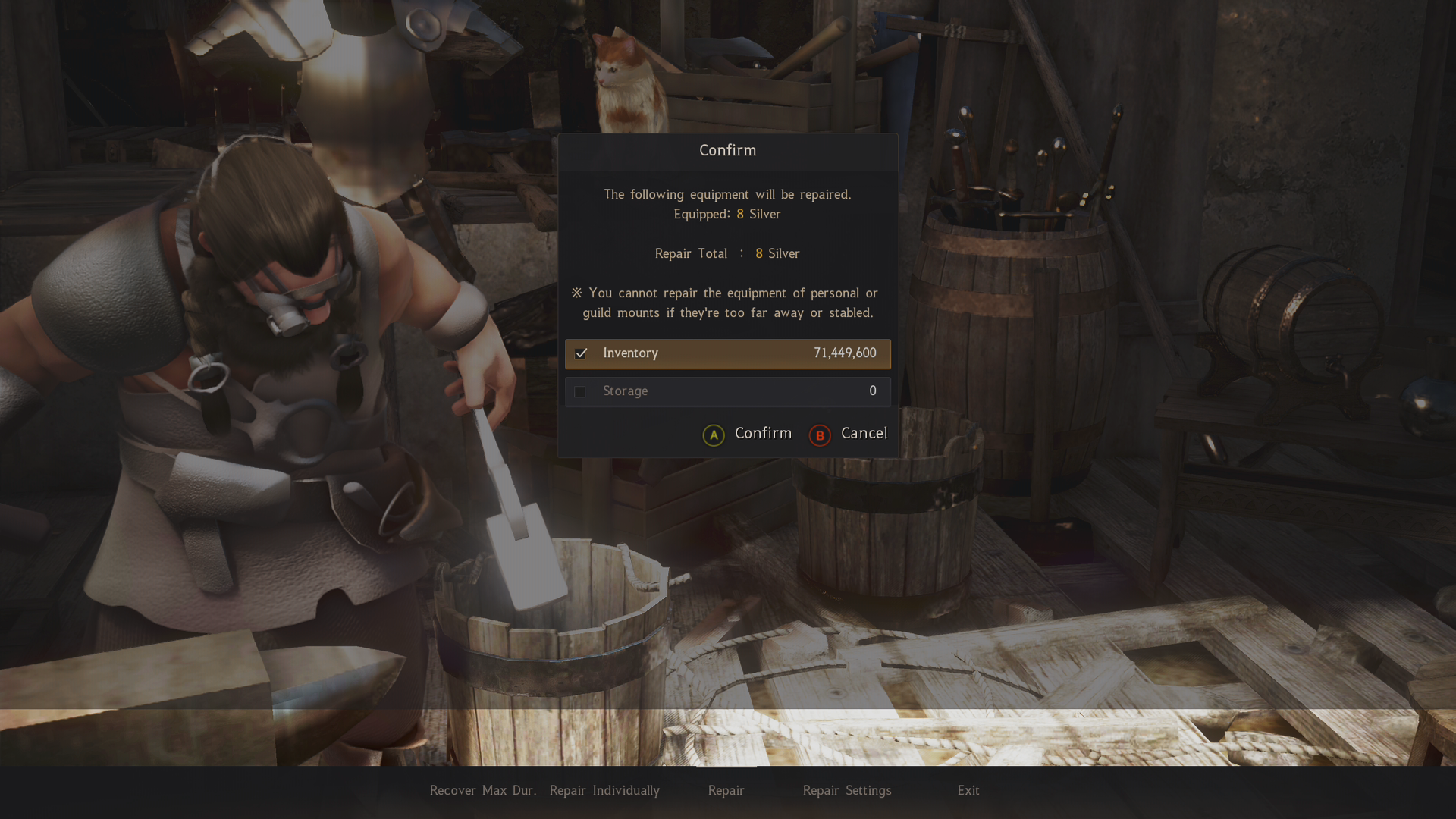 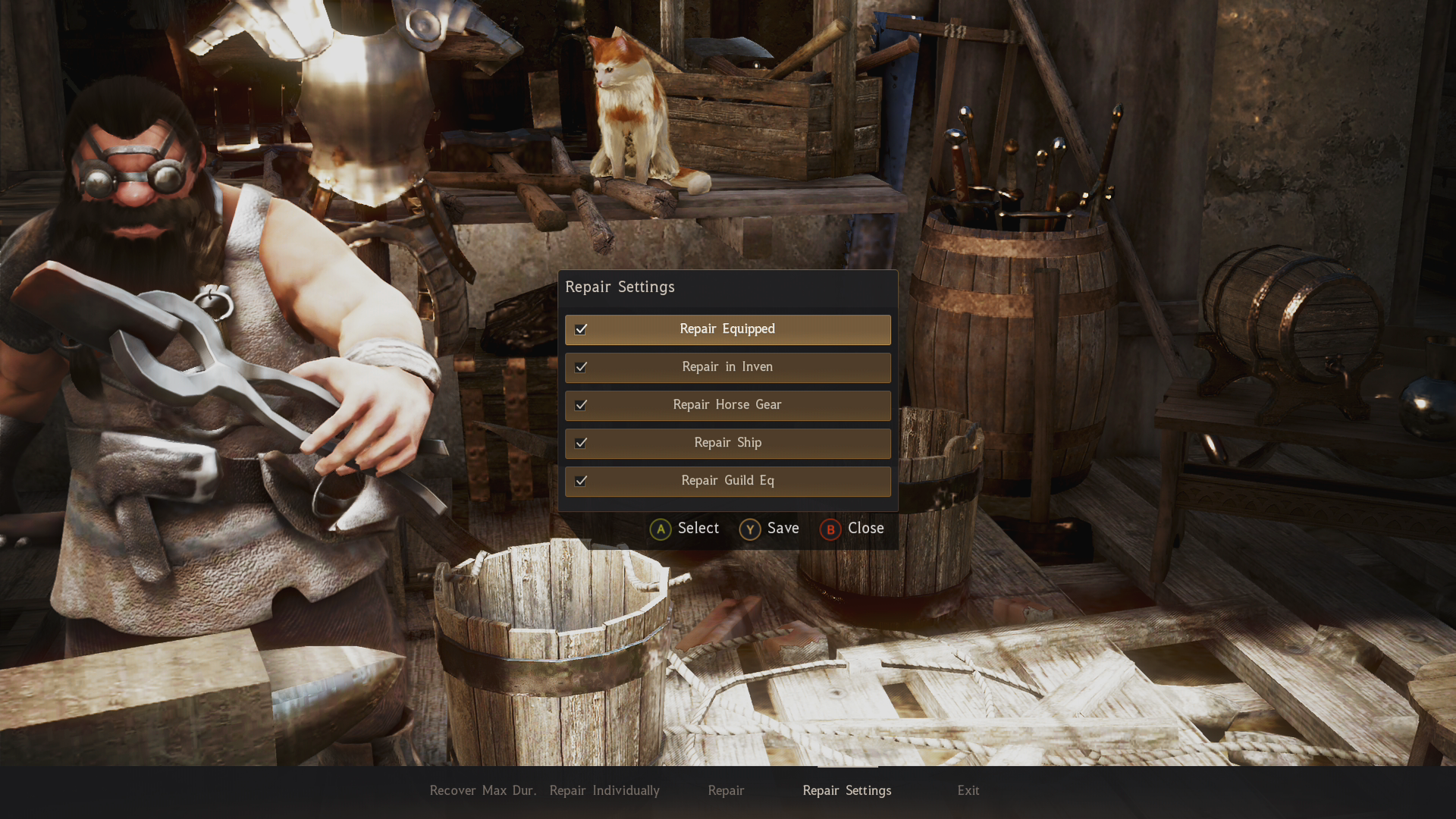 ● Earthly Pain
- Fixed the issue where the sound effect of attack 1 would not be played.

The Adventure Logs were originally designed to provide a different means of experiencing the variety of content Black Desert had to offer, while also rewarding the Adventurer with items or stats.
To help new Adventurers progress through the available Adventure Logs with ease, we've altered some of the objectives for these entries, including Igor Bartali's Adventure Journal that started it all.
● Improved the Adventure Logs as follows:

Cron Meal cooldowns have been reduced from 30 minutes to 10 seconds.
Cron Meals were used in a variety of different content, but were inconvenient to use if ever they were accidentally consumed due to the long cooldown times.
To prevent such mishaps, we decided to reduce their cooldown to 10 seconds. However, considering how Health EXP can be gained from food consumption, we decided to add the "Satiated" debuff to keep the rate of gaining Health EXP the same as before.
Please note that certain other food effects can still be stacked, hence the reason why we chose to retain their respective cooldowns as before.

● The following item names and tooltips have been adjusted:

* Applies to the loot that is obtained after the update. Does not apply to Syca's Rare Boxes already in your possession.
● Changed the following loot price that can be obtained by gathering with a Hoe after defeating mushroom in Polly's Forest:
- Loot Price: 1,955 → 9,720

● There are stories/side-quests that come from all over the world of Black Desert:
- Crio from Velia says that there is a fish well known for its taste.
- It seems like a cute kitten from Velia is waiting for someone.
- It is rumored that there is a kid that speaks with an unusual accent in the Calpheon Slum.
- A Valencian archaeologist is waiting for news from her sister, who has decided to explore the desert in search of the Aakman Temple.
- The O'draxxia Work Manager and Storage Keeper have started to spread new rumors.
- Benns Lamute of the Lamute Gang heard a rumor regarding treasure chests at Papua Crinea Island.
- A soldier guarding the supply manager's wares in Heidel has yet to hear back from his brother at the Castle Ruins.
- They say a man at Marino Farm craves to taste the fabled "grape".
- A hungry child in the Calpheon Slum is in need of aid.
- A man in Valencia appears to be in dire need of a break.
● Improved Miya's Delivering Goods quests, accepted in the Dancing Marlin Tavern at Velia, to receive the trade good immediately when accepting the quest.
- Affected Quests: Delivering Goods: Baremi Island, Delivering Goods: Narvo Island, Delivering Goods: Tinberra Island
- Accept the quest and obtain the goods through dialogue → Accept the quest and obtain the goods immediately if there is an empty slot in your Inventory
● Improved on the energy exchange function where you could not exchange energy for energy potions via Alustin in Velia if the character had 200 or more energy and did not complete the renewed Balenos questline.
● Improved the "Traveler's Map" item, received as a reward for completing the "Purified Ritual" quest, to be usable near Sarma Anin during the Mediah main quest "The Kingdom of Mediah."
- Therefore, the quest location of the quests that required you to cross the Mediah Castle bridge was changed to a location before the bridge.
* The Black Sun, [Boss] Awakened Black Spirit, Purified Ritual, The Kingdom of Mediah
● Improved to be able to accept "Shining Brighter: Narc Ear Accessory" and "Shining Brighter: Tungrad Earring" from Jetina, the Manager of the Old Moon Guild even with enhanced earrings in your possession.

To celebrate Black Desert being serviced in all regions, your longtime companion, the Black Spirit, has prepared a special gift for the occasion in the forms of the "Blood-eyed Visor" and "Blood-eyed Earrings!"

We'd like to thank all of our Adventurers for enjoying Black Desert.
● Added Event quests available through the Black Spirit to obtain the "Blood-eyed Visor" and "Blood-eyed Earrings."
- You can find the [Event] Touchy-Feely Heart to Heart and [Event] Now You're Making Me Blush quests in the Black Spirit - Quest - Event tab.
- These quests will be available from July 20, 2022 (Wed) after maintenance until Dec 28, 2022 (Wed) before maintenance (once per Family).
* You can move the Blood-eyed Visor and Blood-eyed Earrings to another character in your Family via Storage.
* You can find all the details in our event notice [Amass the Power of the Lost Dragon Seals].

● Changed so that Popular Looks and Popular Creators from the Beauty Album can be searched by "All" instead of "1 Year".
● Fixed the issue where you could only purchase one item at a time when using the Central Market via the website and the Black Desert+ app.

● Fixed the issue where some Customizations would display the [Dark Knight] Shudad Black Kriegsmesser being held at an abnormal location.

● The appearance of [Mystice] Sapphire Storm's gloves in the Pearl Shop has been adjusted.
● Fixed an issue where PC Key guides would be displayed when proceeding with '[Season Quest] Day 33, Earth Is a Source of Life'.
● Fixed the issue where training your Ribbon Cat to Tier 5 would incorrectly change its looting cooldown.

● Fixed the issue where Drakania could use the Shattered Dragon's Malice item in the Arena of Arsha.