● The pre-creation of the new class “Sage” has begun. 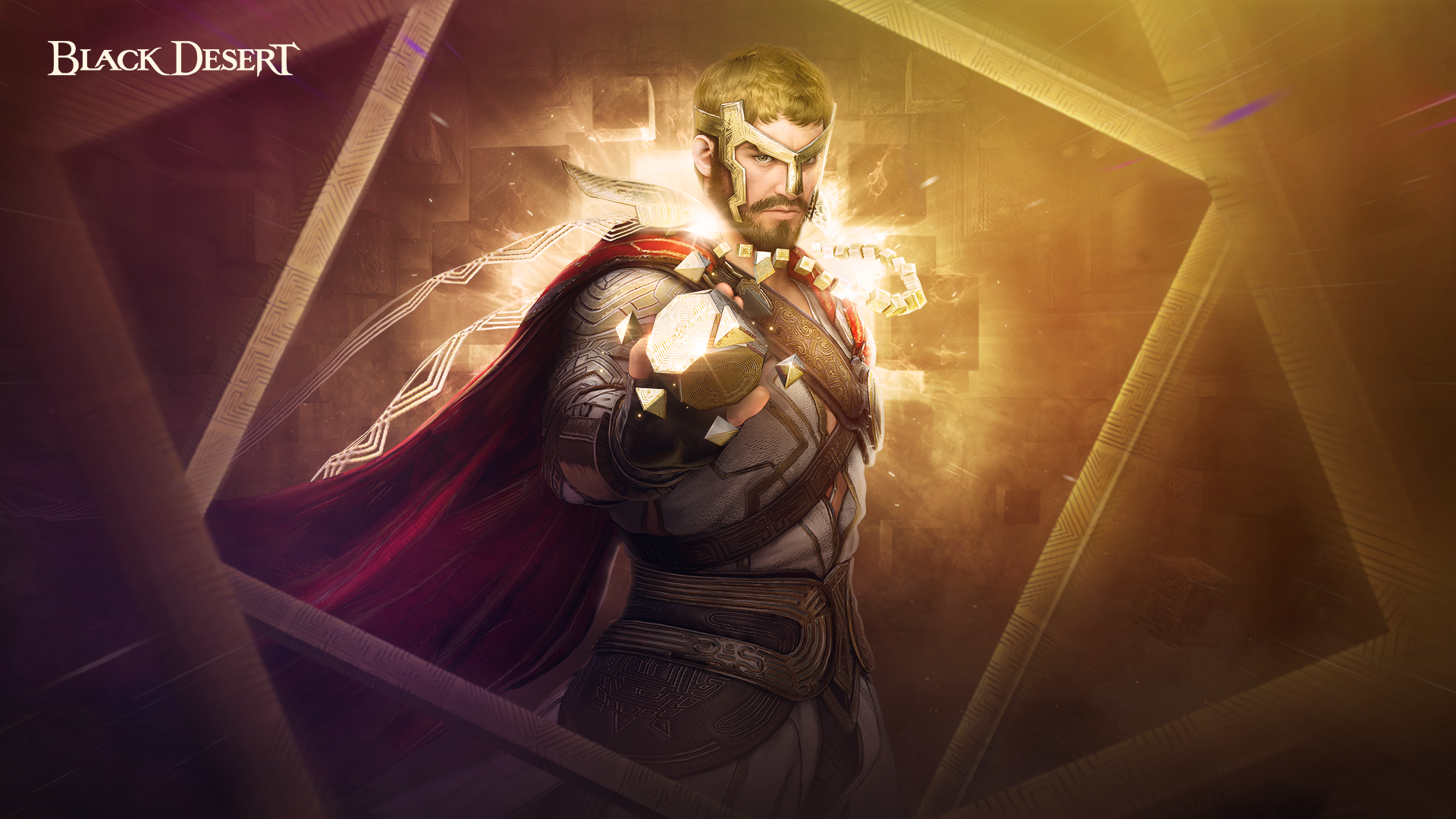 - You can pre-create and customize Sage.

- The number of slots expandable with a Character Slot Expansion Coupon has been increased to 22 slots.

● Items “Ancient Spirit Dust” and “Caphras Stone” have been added.

- You can obtain Caphras Stone x10 by performing Simple Alchemy with Ancient Spirit Dust x50 and Black Stone (Weapon/Armor) x10, and Black Stone Powder x1. However, you will get the same amount of Alchemy EXP as when you make the stoens one by one.

- You can obtain Ancient Spirit Dust and Caphras Stone from Mining, Underwater Gathering, Gathering (Collecting from tree sap or blood using Fluid Collector, Butchering, Lumbering), or from defeating monsters in areas of Valencia, Kamasylvia, and Drieghan.

- You can obtain Caphras Stones along with Ancient Spirit Dust at a fixed rate by defeating field boss Katzvariak.

- The areas where Ancient Spirit Dust and Caphras Stone can be obtained are the following. You can obtain Caphras Stones at a higher rate at Mirumok Ruins and Blood Wolf Settlement.

● Caphras Enhancement system has been added.

- Caphras Enhancement is a system where you can release the potential of TRI (III) or higher weapons and defense gear with Caphras Stones.

- You can use this system by summoning the Black Spirit and selecting Enhancement > Caphras Enhancement.

- Caphras Enhancement can be done for up to level 20. PEN (V) gear can be enhanced until it reaches level 5, which is scheduled to be extended to level 20 with further updates.

- When you enhance a TRI (III) or higher weapon/defense gear with a Caphras Stone, you’ll get Caphras EXP acculumated to move onto the next level.

- The level rises when you cumulate an enough amount of Caphras EXP. A special effect will be given each Caphras Enhancement level.

- Button will be activated when you reach level 20.

- Please note that if the enhancement level of your gear drops (ex. TET (IV) -> TRI (III)) after enhancing it through normal means (using Black Stones) with cumulated Caphras EXP, only 50% of the EXP will be kept.

- On the other hand, if the enhancement succeeds with Caphras EXP (ex. TRI (III) -> TET (IV)), only 10% of the cumulated Caphras EXP will be carried forward to the next level.

- If you fail the enhancement using Cron Stones, 5% of the used Cron Stones will be converted into Caphras EXP.

- You cannot Devour a gear with Caphras Stone EXP.

※ Ability given at each level is not stacked.

● The function to extract Caphras Stone from gear has been added.

- Find the Blacksmith in each town to extract Caphras Stones.

- Only approximately 95% of the Caphras Stones used for enhancement can be extracted.

- Enhancement level of the equipment will remain the same even if you extract Caphras Stone from it.

● Added a new quest where you can get information about processing Caphras Stone. Complete “[Boss] Witch-Hunting" and find one of the NPCs below. The quest can be done once per Family.

● The following two new Knowledges related to Caphras Stone have been added to Balenos Adventure Log II. There is no change to the maximum increase in Energy with this addition.

- The Power of Caphras Stones

● The following items have been added to the Drop Item menu:

● Caphras Stone has been added to the rewards of the following daily quests in Star’s End:

- [Repeat] Those Who Are Unwilling to Talk..

● The following items have been added to Patrigio’s Secret Shop.

● The Life Mastery system was added.

- Life Mastery is a different scale from life level that shows the character’s proficiency in life skills.

- The higher Life Mastery an Adventurer has, the better items they can get from life skill contents.

- The message is displayed on the bottom-right part of the screen, and you can set it to disappear after a certain period of time. 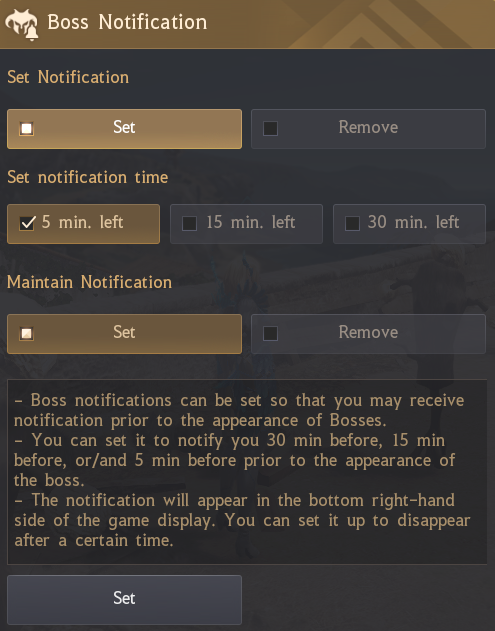 - Adventurers who've completed all 5 chapters of the Book of Margahan Vol. 1 can accept the quest "Adventure Log: Agris, Prophecy in the Past" from the Black Spirit.

- Agris Fever points are consumed differently based on the monster defeated.

- Agris Fever points are shared by all characters of the same family.

- You can activate Agris Fever in My Info > Buff.

● Characters can now have a total of 6 Skill Add-ons regardless of Succession and Awakening. 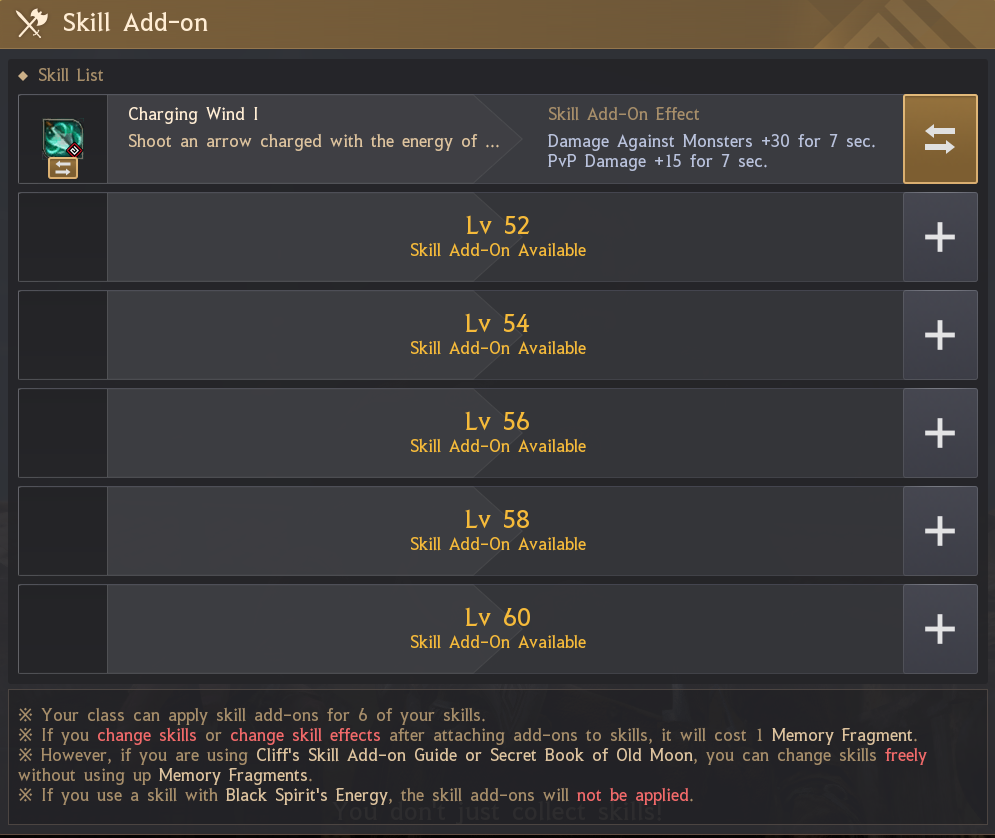 ● Core: Petal Bloom - Fixed issue with the skill's graphic effects so that they're properly displayed when the skill is used after Chase.

● Fixed the issue where throwing the Kunai while moving to the left wasn't applying damage on the last hit while having learned Kunai: Paralysis I and Absolute: Kunai Throw.

● Morning Dew - Fixed issue with character's motion being abnormal when using this skill under a certain situation.

● Core: Luthraghon's Call - Fixed issue with the skill's graphic effects so that they're properly displayed when the skill is used after Glide.

● Changed the effects gained from setting up a bonfire with a Bonfire Tool.
- HP Auto Recovery +25 for 10 sec.
- Energy Recovery +1 for 10 sec.
- The duration of the bonfire has been extended to 30 min.

We have been going through feedbacks from Adventurers through the official website since Nova was released. And many have given us comments regarding Succession, particularly related to Axian. They said that it is difficult to respond quickly in emergency situations as most of the attacking motions of Nova are lengthy while Axian absorbs her HP. So we added an HP recovery effect to “Command: Rime Ice,” which is a frequently used skill with a relatively fast casting speed.

Next is about Nova having difficulties taking other actions when she is hit in the defense mode, as she gets knocked back for quite a distance. So, emphasizing the image of shield “Quoratum,” we improved the situation so that Nova is not knocked back while in “Quoratum’s Protection.”

Last but not least, Adventurers have commented that the casting speed of Nova’s Succession skills is generally slow. This is intended in some part, as we wanted to keep the concept of the main weapon Morning Star being a heavy, extendable weapon. However, for the seamless combat experience of our Adventurers, we increased the attacking and movement speed of Nova’s guards and Axian, and changed Axian’s attacks to be more threatening. Hence, the guards and Axian will now attack enemies at a higher speed upon Nova’s order

● Improved combo transitions from Prime: Stamma's Mate to other skills.

● Improved skill transitions from other skills to Prime: Frozen Darkness.

● Command: Rime Ice can now be used as a combo after Succession: Quoratum'sOpening.

● Increased All DP increase effect duration from 5 sec. to 10 sec. which can be obtained by summoning Thornwood Guards and going into protection stance after learning Succession: Quoratum's Protection.

● Axian and Thornwood Guards will now prioritize orders when casting Prime: Icy Prison, even when carrying out other actions.

● Axian and Thornwood Guards will now prioritize attack on the target aimed by the character when casting Prime: Icy Prison or Command: Opening.

- For more details on the Happy Black Spirit buff, please refer to [A Thank You to Adventurers Around the World].

● (NA server) As the summertime begins, the time schedule for Node Wars, Conquest Wars, Tribute Wagons, and World Bosses has changed as follows:

● Novas can now obtain a set for their class from Shudad Black Premium Outfit Box.
● Guardians, Hashashins, and Novas can now obtain an outfit for their class from Glorious Shudad Premium Set.
● Added Remnants of the Rift in the item description of “Heritage of the Forgotten.”
● Added “Belongings of an Adventurer” to the list of exchangeable items in the item description of “[Event] Remnants of Destiny.”
- When selecting “Remnants of Destiny,” you will now be navigated to Binave, an NPC in Sand Grain Bazaar.

● As you can obtain Ancient Spirit Dust and Caphras Stone at a fixed rate by defeating Katzvariak, the maximum number of servers it appears has been changed to 7.

(Katzvariak does not appear on Siege servers and Arsha servers)

- You will be able to obtain high quantities of Ancient Spirit Dust instead of Box of the Dead when defeating these new bosses.

● Fixed the awkward display of a certain area in Taphtar Plain.

● The “Go to Target” function can now be used by topics, not just by each Knowledge.
- You can use this function by selecting the higher category group of Knowledge.
- Targets for all Knowledge in the selected topic will be marked in bright yellow on the minimap.
● Active Effects UI has been added.
- Go to Menu > Character > Active Effects to see the list of buffs and effects currently applied to your character.
● Fixed the issue where the notification option for “Items Obtained” was not be displayed.
- You can toggle this option by going to Menu > Settings > General Settings > Notification > Items Obtained.
● Updated the item selection window that appears when the character dies.
● (Added) You can now see the durability of your cooking utensil and alchemy tool while cooking or performing alchemy.