A new update has been released, bringing with it an overhaul to various monster spots, Krogdalo Horse gear and more! Read below to find out more about the June 8th Update.

● Krogdalo Horse Gear, embued with the power of Krogdalo, has been added.
- Though crafting Krogdalo gear is a difficult task, it is the best horse gear set available.
- In addition to the performance improvements, it also allows certain skills to become more powerful
- There are three types of Krogdalo's Horse gear, and they can be crafted from Stonetail Horse Ranch 3, Horse Gear Workshop
- Equipping 3 or more of the same type of horse gear will provide a set effect which enhances certain skills.

First off, we are adding traits unique to each monster zone for all regions (excluding Balenos, Serendia, and Mediah territories).

Based on recommended AP levels, these unique traits will include efficient Agris Fever point usage, and higher Combat and Skill EXP rates within these zones. With this update, we hope to provide a broader variety of choices that will meet the diverse goals of our Adventurers as they head off to a monster zone.

We're also adjusting the loot tables of each monster zone.

Rather than adding new items to existing loot tables, we've taken the approach of looking at the overall balance of item drops and making adjustments where needed. Since we focused mostly on bolstering loot tables of zones that were slightly underwhelming, this update is expected to maintain or slightly increase profits from defeating monsters. For example, in the case of Cadry Ruins, which dropped Black Stones and Rosar Weapon Boxes, we slightly decreased the drop rate of Rosar Weapon Boxes and increased the drop rate for Caphras Stones and Scroll Written in Ancient Language, which we expect will slightly increase your gains from this zone. For Hystria Ruins, we made one of the zone's signature loot drops, the Ancient Power - Black Shard, now drop from Elten and Tukar Balten as well. These are the kinds of profit-increasing changes we implemented to balance out the differing loot tables between monsters and thereby increasing the potential for profit in most monster zones.

We're also expanding the means to obtain even greater item drop rate buffs than before.

Family Fame will now also add an additional item drop rate buff, and we've increased and expanded the influence of the item drop rate buff gained from Ecology Knowledge. This change was made so that Adventurers would gain a sense of naturally benefiting from all the hard work they’ve put into playing the game.

In addition, we are raising the maximum item drop rate threshold to 400%.

You can reach up to Item Drop Rate +300% through various means such as scrolls, campsite buffs, ecology Knowledge benefits, in-game events, and Blessing of Kamasylve. Owning a territory will bump that Item Drop Rate up to +350%, and if playing on an Arena of Arsha server, you will reach the maximum possible item drop rate of +400%. On a side note, item drop rate buffs such as the Hot Time event will now also apply on Arena of Arsha servers.

Some of you may have different opinions regarding the means of reaching the maximum item drop rate threshold.

However, we settled on this updated system while considering how difficult it was to previously reach Item Drop Rate +300% without special event buffs or scrolls. We will continue to work on providing greater means of obtaining these buffs, so we ask for your patience and understanding.

The overall adjustment and improvement of Monster Zones that we've added today is a way to expand your choice and provide a comfortable experience as we announced during the last Calpheon Ball.

We worked long and hard to provide these updates in a timely manner and will continue to work hard in order to give all of our Adventurers the best possible gaming experience.

● Improved the loot and drop rates of each monster zone.
※ Excludes Balenos, parts of Mediah, Kuit Islands, and the Great Ocean.


[Caphras Monster Zones]
● The following zones gained the trait of having a higher chance to drop Caphras Stones compared to other zones of similar recommended AP levels.

[Valuable Junk Loot Zones]
● The following zones have seen the value of junk loot obtainable by looting monsters in Kamasylvia and Drieghan territories increased.
※ These changes in value will not apply to junk loot obtained prior to the June 8th Maintenance.

[Contribution EXP Monster Zones]
● Added weekly subjugation quests that grant a substantial amount of Contribution EXP.
- The Contribution EXP reward will automatically be issued upon quest completion based on your current Contribution Point level.
- You can complete The following weekly quests in each monster zone.
※ The above quests are not affected by the increased Contribution EXP gains of the Caphras - Journal of Glory/Elion - Tome of the Sun.

● The Item Drop Rate was increased for "Sherekhan's Panacea" and "Dragon's Fang" lootable from defeating monsters at Sherekhan Necropolis (Night).
● Applied the following changes to the attack patterns of Mirumok Watchers and Mirumok Lookouts at the Mirumok Ruins:

● Made the following improvements to how summoning works with the item Ancient Relic Crystal Summon Scroll and the Pila Fe Scroll:
※ The summon scrolls can still be used via the old method where the party leader just summons the boss.
- The Faded Ancient Relic has up to five different "stages" in which monsters can be summoned. The required amount of scrolls and recommended AP per stage are as follows.


* The difficulty of the boss is determined by the number of scrolls used regardless of the size of your party. In other words, we strongly recommend you bring as many party members as you can.

For example, the Stage 1 boss summoned by one person registering one summon scroll versus one party of five members registering one summon scroll each will be of the same difficulty level. Therefore, bringing as many party members as possible will greatly increase the efficiency of taking down these bosses.
To utilize the party summon scroll UI, you must be in a party. If you wish to solo it, you can form a solo party by:
1. Go to Menu > Community > Find Party/Platoon 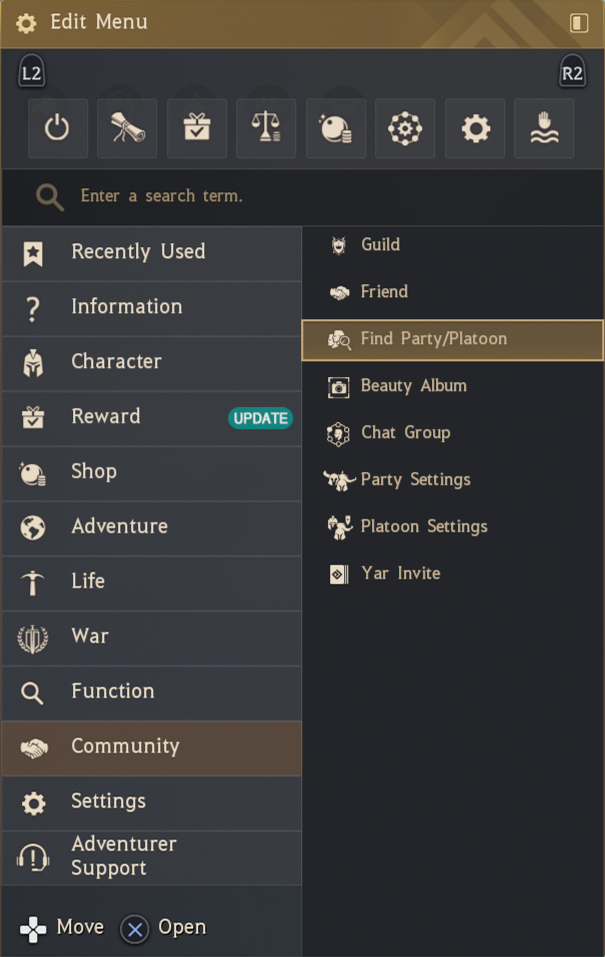 2. From here, after posting a recruitment ad, you will automatically form a party. You can cancel the ad to ensure that no one else will join your party. 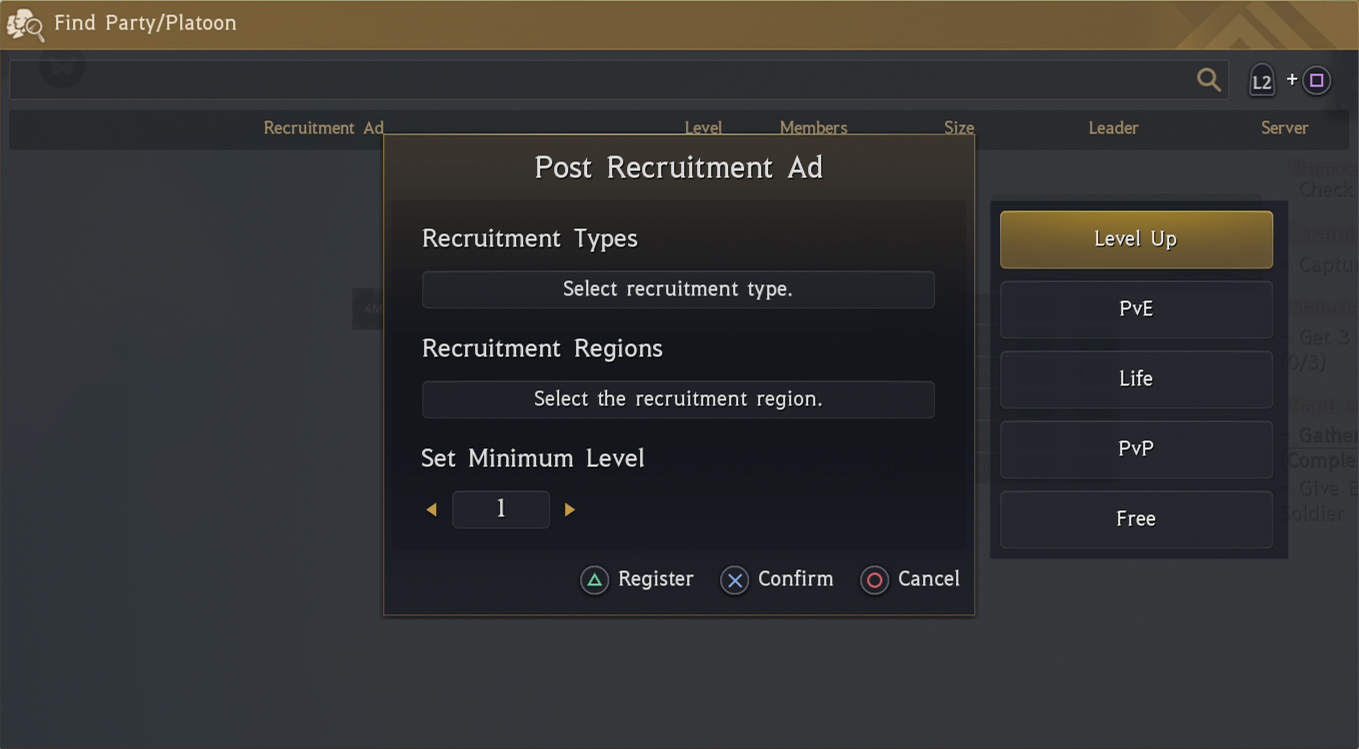 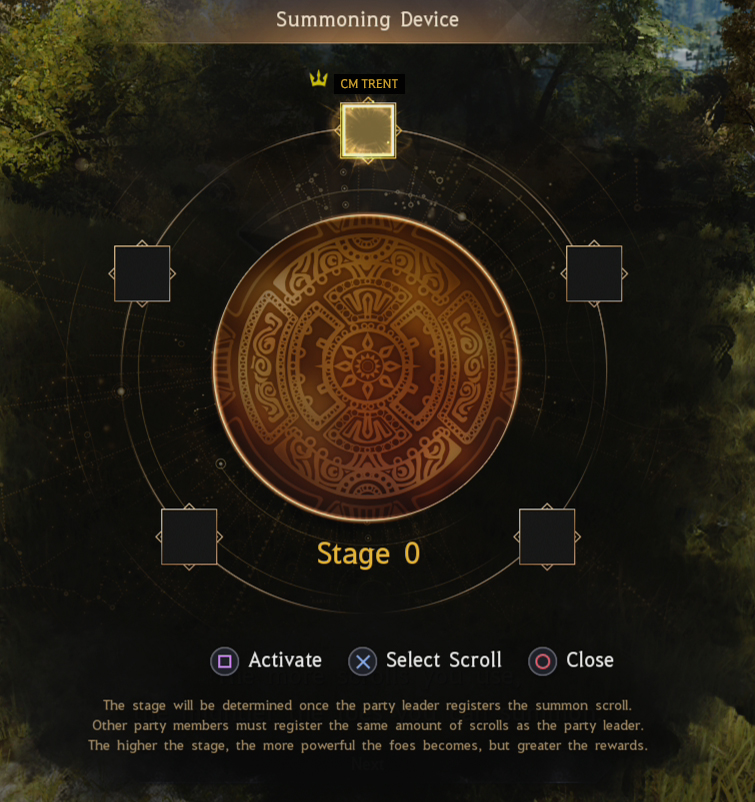 - Monsters summoned will be stronger when you attempt higher stages. However, you will be able to defeat the monsters, even if you do not meet the recommended AP, if you are in a full party of 5 members.
- Additionally, using the improved method of summoning the boss give you a slight chance to face the [Drawn to the Ancient Relic] monsters that drop special loot.
* Defeat these monsters to obtain additional loot.

● Improved the explanation in the tooltip information of the following boss summoning items to make it easier to understand the summoning mechanic:
- Ancient Relic Crystal Summon Scroll, Pila Fe Scroll

The Black Desert summon scroll content, a.k.a. the "Disco Ball," was one of the better means of acquiring enhancement materials such as Memory Fragments. However, the amount of time spent waiting for the boss to appear was greater than the actual time spent taking the boss down. Thus we've thought over many ways to make the process more interesting, but felt it somewhat lacking to simply reduce the summoning time to "summon a powerful boss and obtain loot, " and thus decided to go with using a greater amount of summon scrolls to summon a mighty foe.
This new method is similar to the "combine the (dagger) keys" method from Atoraxxion's "Sol Magia," where you can pick your own difficulty and potential rewards that scale up to Stage 5 (which will require 5 scrolls each). While not included in today's update, we plan to implement a similar scaling system for the scrolls obtained by combining Forbidden Books as well.

In order to make Atoraxxion more enjoyable, we removed the "10,000 Agris Fever point" cost for the weekly reward quests and increased the drop chance for items needed to access each zone in the dungeon and the "Circuit of Special Information" that grant special knowledge. We hope these changes will encourage more Adventurers to challenge Atoraxxion.
● Improved the following items, which are required to craft items that grant access to each zone in Atoraxxion, to now have a 100% chance to drop.

● Increased the drop rate for "Circuit of Special Information" that grant knowledge for certain monsters of Atoraxxion.

Drakania
● Fixed an issue where PC commands appeared in the Prime: Embers skill.

● Added 3 "Rovinia's Supplies" daily quests to earn additional Sailing EXP.
- These quests require you to deliver the supplies within the time limit.
- Delivering the supplies within the time limit will award you with some Sailing EXP and Crow Coins.
- The amount of Sailing EXP awarded differs based on the quest.
- You can accept these quests from Rovinia in Velia, from which you can only choose 1 of the 3 quests to complete.
- These quests reset every day at midnight.
- To accept these quests, you must have completed "Jarette's Support" from the Suggested "Oquilla's Eye" questline.

● Added the ability to exchange Seal of the Undying x50 for a Crow Coin Bundle from Patrigio in Crow's Nest.

● A new menu has been added to promote the Tuvala Cup! You can find a QR code which will take you to the sign up page allowing easier access.
● Modified the world map to display the names on Monster Zones clearly.
● Improved the description of the Old Moon Trade Pass
- +5% Marketplace Silver Collection for one transaction.